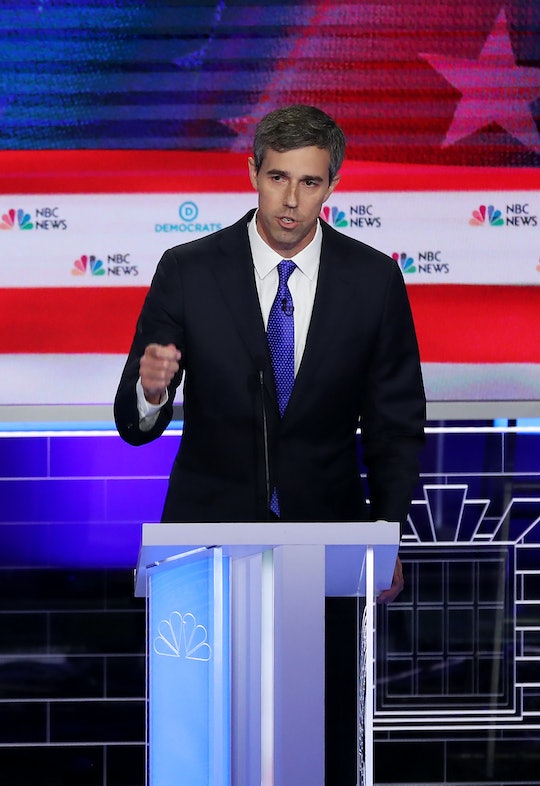 The 2020 presidential race officially kicked off with the first Democratic Debate on NBC. With the race so congested, every candidate is trying to stand out from the crowd. For his very first question, Texas Congressman Beto O'Rourke took the opportunity to show off his multilingual skills. But what did Beto O'Rourke say in Spanish during the debate?

More Like This
The Obamas’ New Family Rule? Get Vaccinated If You Want To Hang Out With Us
Biden Proposes Plan To Give Every Child Free “High-Quality” Preschool
Here Are The Best Kids' Shows On Hulu To Enjoy As A Family
Fries, Beer, & More Free Stuff You Can Get If You’re Vaccinated

When O'Rourke was asked about a 70 percent individual marginal tax rate, he answered in English at first. "This economy has got to work for everyone," he said. "Right now we know that it isn't. It's going to take all of us coming together to make sure that it does."

But then, the congressman switched up his game and proceeded to answer in Spanish. "We need to include everyone in the success of this economy," he said according to a translation by the Washington Examiner. "But, if we want to do this, we have to include everyone in our democracy. Every voter needs representation, and every voice must be listened to."

O'Rourke then switched back to English, and ended his answer as what appeared to be a confused Cory Booker looked on. "I would support a tax rate and a tax code that is fair to everyone," O'Rourke said. "Same rate you tax ordinary income. Take that corporate tax rate up to 28% and you generate the revenues you need to pay for the programs we are talking about."

Considering the debate is taking place in Miami, a city with a large Latinx community, it makes sense that O'Rourke took the opportunity to address the audience in Spanish. Senator Booker also responded to one of his questions in Spanish, albeit not as fluently as O'Rourke.

This isn't the first time O'Rourke has addressed his audience in Spanish. As reported by the El Paso Times, the congressman has spoken Spanish in campaign ads and rallies, and he even challenged Senator Ted Cruz to a debate in Spanish last year. In a March campaign rally in El Paso, Texas, he energized his audience with some inspiring words in Spanish, and they responded with a Spanish chant — "Si se puede!" — that was once a famous Mexican-American farmers rallying cry.

With a name like Beto, and those amazing Spanish skills, you might think O'Rourke has some Latinx heritage. But according to The Miami Herald, he is of Irish descent and he was given the nickname "Beto" by his father, an El Paso County judge and commissioner. His dad gave him the nickname because he felt it would help if his son would ever want to run for office in their city, which has a high population of Mexican-Americans.

According to The NY Post, by the year 2050, there will be an estimated 138 million Spanish speakers in the US, which means being bilingual is going to be a huge asset for any presidential candidates. It looks like Beto is ahead of the curve when it comes to reaching all audiences, but I'm not sure how far that will take him in this upcoming election.