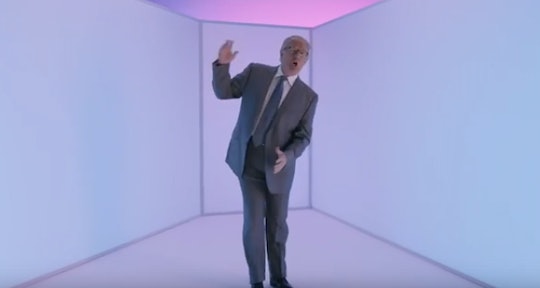 What Did Drake Think About 'SNL's 'Hotline Bling' Parody? Hopefully, He Was Laughing Right Along With Us

The Internet has been poking fun of Drake's "Hotline Bling" geek-chic dance moves for a while now, so it didn't come as a huge surprise when SNL took a jab at Drizzy's dancing last night, too. On the Nov. 7 episode, Jay Pharaoh appeared as Drake defending his dance moves, comparing his "slick moves" to a dad, a physics teacher, and, well, awkward guys with no groove. And then of course came Trump, who appeared briefly to display some Drake-esque moves of his own, and man was it hilarious. But what did Drake think of SNL's "Hotling Bling" parody? I would love to know.

The pre-taped clip went heavy on Twitter pretty much immediately, so it's safe to say if Drake wasn't watching live, he's seen it by now. And from everything I know about Drake (cause you know, we're thisclose), I'm willing to bet he found the whole thing pretty comical. For one, Michael Che as Drake was seriously on point. (Not that we expect any less from the SNL funnyman by now.) Secondly, some awesome guest stars appeared to make the vid even better — like Martin Short, playing his famous SNL character Ed Grimely. But also, I mean... come on:

But the other reason I'm willing to bet Drake was cool with it all was the fact that so far, he's taken all the "Hotline Bling" jokes he's been getting in stride. Case in point: Though Meek Mill called out Drake for having "two left feet" in the video at a show in Philly on Oct. 23, Drake didn't fire back against Nicki Minaj's man. In fact, according to the blog Hollywood Life, Drizzy wasn't bothered by the mockery and memes. And maybe because, hey, all publicity is good publicity. Right?

Look, when you're Drake, you can dance however the freak you want. Because you're Drake. And, who knows, I wouldn't put it past Drizzy to be stunting us all and actually have secretly awesome moves up his sleeves, because he sure got everyone talking. And, did I mention he's Drake? I don't really think his rhythm is up for debate. The man can keep a beat just fine.

ICYMI, check out the SNL "Hotline Bling" parody with its super awesome Trump cameo below, and see just what got everyone talking about last night:

Drizzy dance jokes aside, "Hotline Bling" is at the top of the Billboard Charts, and it was the best selling song in mid-October when it dropped. So hate on, haters!