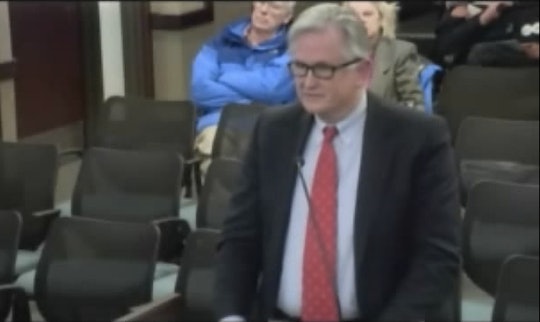 What Did Fleet White’s Open Letter Say? It Was Highly Critical Of The Ramsey Investigation

The murder of 6-year-old JonBenét Ramsey has remained one of the world's most captivating unsolved cases, thanks to its plethora of strange twists and turns. There was the bowl of pineapple left on the Ramseys' table, the rambling ransom note, the unmatched DNA found on Ramsey's body. And then there was the massive amount of speculation from the public — everyone from the media to the 911 operator who first heard of the crime to some of the Ramseys' closest friends had something to say during the ensuing investigation. One friend, Fleet White, wrote a letter about JonBenét Ramsey and her case that especially intrigued the few who heard it, and still does to this day.

Fleet and his wife, Priscilla, were close friends of the Ramseys, and they were present throughout a few of the case's key moments. The Ramseys had been at the Whites' house for Christmas dinner, the night that JonBenét went missing — the Whites' two kids were close friends of the Ramseys, according to Westword. Then, the following morning, Patsy Ramsey (JonBénet's mother) called Priscilla in a panic, asking her to come over. Fleet then reportedly drove JonBénet's brother, Burke, to the White family home in order to shield him from the nature of the incident, and Fleet and John (JonBenét's father) searched the house for the young girl. Fleet was with John when they found JonBénet's body in the basement.

So when Fleet wrote an open letter to "the people of Colorado" 20 months into the investigation, people sat up and took notice.

The main purpose of the nearly 5,000-word letter, it seemed, was to call into question the reliability of Boulder District Attorney Alex Hunter and of the investigation in general. Fleet began with:

After JonBenét Ramsey was killed in Boulder nearly twenty months ago, her parents, John and Patsy Ramsey, immediately hired prominent Democrat criminal defense attorneys with the law firm of Haddon, Morgan and Foreman. This firm and its partners have close professional, political and personal ties to prosecutors, the Denver and Boulder legal and judicial communities, state legislators, and high-ranking members of Colorado government, including Gov. Roy Romer. The investigation of her death has since been characterized by confusion and delays.

Indeed, the district attorney and the Ramsey attorneys have simultaneously rebuked the police for 'focusing' their investigation on the Ramseys when in fact police were simply following evidence.

Fleet's letter went on to show different alleged connections in the ongoing investigation that seemed suspicious. His letter pointed out delays in assigning a grand-jury investigation, and explained the various and reportedly "chummy" connections between the district attorney's office and the Ramseys (via connections with John's employer and his attorney). He seemed to suspect that the investigation was being delayed purposely, to serve "the selfish interests of a relatively small number of public servants and wealthy and powerful people."

Boulder Police have declined to comment on any of the comments connected to the Ramsey case, telling Romper that officials would not be giving interviews ("Members of the Boulder Police Department will not be participating in interviews related to this investigation," a spokeswoman said), but in 2014, Boulder Police Chief Mark Beckner released a statement that, in part, read:

For his part, the Ramsey family attorney, L. Lin Wood, maintains the Ramseys' innocence. "In terms of the accusations against John and Patsy Ramsey, the Boulder District Attorney, Mary Lacy, publicly exonerated them in 2008 based on irrefutable DNA evidence," Wood told Romper in a statement. "She apologized to the family and assured them that in the future, they would be correctly treated as victims. The days of Ramsey accusations should have ended then and there."

While Fleet never accused his former friend of JonBénet's death, he was definitely upset by how the district attorney's office handled the case. Whether there was any merit to Fleet's argument, however, remains to be seen. With any luck, the airing of The Case Of: JonBénet Ramsey will shed some more light on the strange twists and turns that took place during the Ramsey investigation.