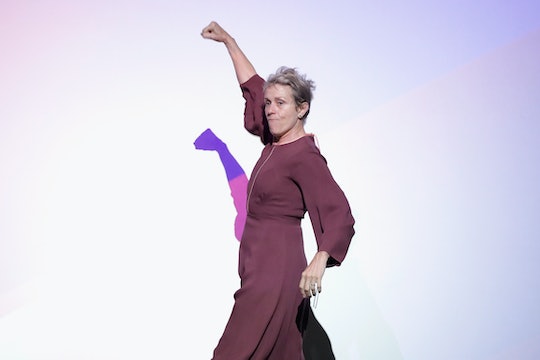 Frances McDormand Was Needlessly Censored At The Golden Globes

No awards show is complete without a little bit of controversy, even if it's a completely unnecessary one. And that's what fans got during the acceptance speech for Best Performance by an Actress in a Motion Picture. So what did Frances McDormand say at the Golden Globes that had the censors furiously muting her words? From what viewers can gather, there was absolutely no reason to silence the actor; it looks like whomever was in charge of the button was just a little too nervous about the possibility of an obscenity slipping out over the airwaves.

Well, I have a few things to say. I'm gonna keep it short, because we've been here a long time, and we need some tequila. All you ladies in this category: Bar. Tequila's on me. Thank you to the Hollywood Foreign Press. I'm still not quite sure who they are when I run into them for the last 35 years, but I love seeing their faces, and let's face it, they managed to elect a female president. I'm just saying. Martin McDonagh, you know how I feel about being your Mildred Hayes. For every ragged inhalation and fierce exhalation is evidence of my gratitude. Our producer, Graham Broadbent‎, thank you for listening to me and valuing my input.

Then, things got weird.

To [no audio], who allowed our film to find its audience, and we are still putting people in the seats at brick and mortar cinemas around the country, call me old-fashioned, but I love that!

What slipped through was actually "Fo— —chlight." That, coupled with some amateur lipreading and a quick visit to IMDb for confirmation, seems to indicated that "Fox Searchlight" was the redacted phrase. I hope my mom doesn't read this and wash my mouth out with soap!

And the censors weren't done with McDormand. She continued,

And have I mentioned my two favorite cowboys, Sam and Woody? Because they are. Then I will have to list the entire cast and crew, because everybody brought their best game to this one. Their very best game. For instance, I cannot throw a baseball for shite. [No audio] one building to another, across a two-lane street. That was really fun, but don't try it at home.

The second bit of missing dialogue is long, maybe eight syllables, but from the context and her body language, it seems like she's just talking about another person involved with the movie throwing ~something~ or maybe teaching her to throw. Unless she was graphically describing a person tossing, say, "marital aids" into traffic, there doesn't seem to be a reason that the public couldn't have heard the full story. Besides, this was after 11 p.m. at night, when things get a little more loosey-goosey on network TV.

You'd think after jumping the gun twice, they'd finally relax and trust McDormand not to offend America's sensibilities, but they had one more bleep for the actor.

That last phrase that NBC deemed to hot for TV? "Tectonic shift." Either somebody didn't notice the "F" in the word "shift," or this is the next step in the Trump administration's attempt to deny and discredit even the most basic of earth science concepts, perhaps to justify fracking or some such nonsense. Who did McDormand piss off? Why didn't anyone else get the same treatment? And will we ever hear the middle of that baseball story? I don't know about you, but I'll be up all night rewinding that scene until I figure it out.