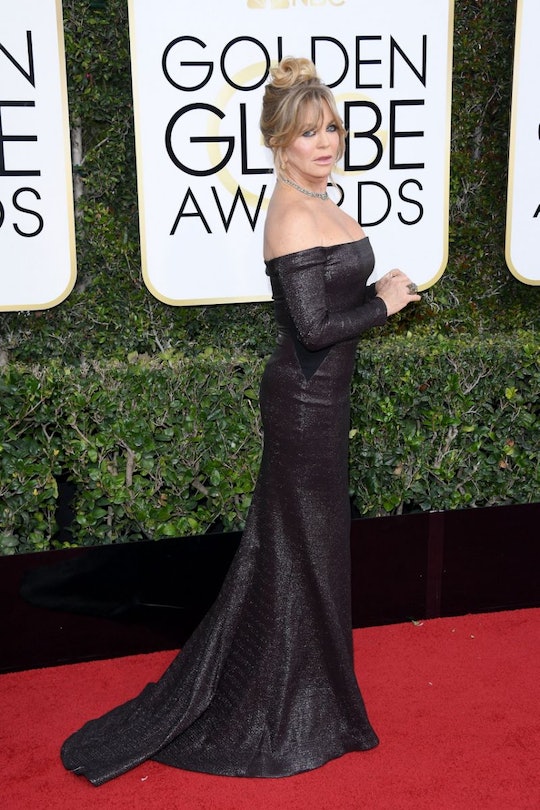 Goldie Hawn Said WHAT At The Golden Globes

Goldie Hawn was one of the most popular actresses of the '70s and '80s, but stepped back from the limelight in recent years. Thanks to the efforts of the incomparable Amy Schumer, Hawn is set to appear in Snatched as Schumer's character's mother. The appearance will mark her first film role in 15 years. Given the hype around that upcoming film, it totally makes sense that Hawn would be invited to be a part of this year's Golden Globes ceremony as a presenter. But what did Goldie Hawn actually say at the 2017 Golden Globes during her presenter speech? Nobody is quite sure, but Twitter was sure glad to see her there.

At one point, either Hawn or Schumer was bleeped out while presenting the Golden Globe Award for Best Actor in a Musical or Comedy. The bleepworthy moment occurred during their intro, after Schumer joked that she'd read for both the mother and daughter roles in their film Snatched. It was a great and obvious jab at Hollywood's noted sexist issues when it comes to actresses and their increasingly limited roles as they age. Shortly after Schumer made the joke and Hawn laughed along with it, one of the two actresses was bleeped out when they swore during their speech.

It's unclear exactly who swore and what they said. But regardless, it was Hawn's presentation "persona" and apparent slurring that really got everyone talking. Many of Hawn's earliest roles capitalized on the "ditzy blonde" stereotype, a trope that Hawn's co-star and co-presenter at the Golden Globes also frequently turns on its head. During their presentation, Hawn seemed to be a bit dazed and confused. Her behavior during her presentation speech was equal parts funny and cringeworthy, as the Death Becomes Her actress laughingly stumbled through reading her lines off of the teleprompter.

Schumer played along, correcting the older actress when she said "mystical" instead of "musical" and remarking that Hawn might need her glasses. But many viewers were a little bit confused about whether Hawn's behavior was an act or if she was actually inebriated. The general consensus seemed to be that it was all planned ahead of time (or perfectly improvised by Hawn), but either way, people were thrilled to see the iconic actress at the awards ceremony. Twitter celebrated with Hawn gifs and love galore, and they were all golden (pun very much intended).

Hawn jokingly stumbling through her presentation of the award was funny, but it had nothing on her dramatic pause during the announcement of the winner's name. Ryan Gosling won Best Actor in a Musical or Comedy for his performance in La La Land, but Ryan Reynolds had also been nominated in the same category for playing the titular superhero in Deadpool. Hilariously, Hawn hesitated after announcing "Ryan" and before following it up with "Gosling," leading the award winner to joke about it during his own acceptance speech.

Whether Hawn ad-libbed her ditzy/drunk presentation or it was planned ahead of time, she pulled it off flawlessly and definitely held her own against Schumer's comedic charms. If this is a preview of what the press tour for Snatched will be like, sign me up for all of it.