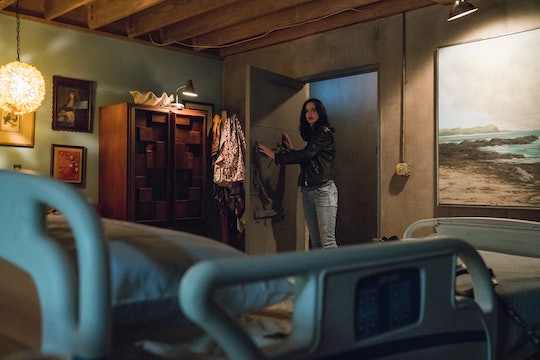 Jessica Jones' Connection To IGH Is Becoming Clear In Season 2

Warning: this post contains spoilers from Season 2 Episode 5. The second season of Jessica Jones is all about Jessica learning more about her past. After the fatal car crash that took the lives of her parents and brother, Jessica eventually woke up with superpowers, but she had no idea where they came from. At the end of Season 1, Trish learned that the mysterious medical company, IGH, probably had something to do with it. So what did IGH do to Jessica Jones?

Less than halfway through the season, fans have already been given a number of answers. Trish learned that IGH not only paid Jessica's medical bills, there's also a chunk of time missing in her medical records. It was obvious that IGH had taken Jessica during that time. With Malcolm's assistance, Jessica was able to locate the broken down warehouse where IGH's headquarters used to be. Inside Jessica began having flashbacks about what happened to her there.

Though things were a bit unclear, she remembered being strapped down to a table with some weird contraption being pushed into her legs. Jessica was also strangled by someone, or rather something, that terrified her, and rightly so. It's obvious that something was also created alongside Jessica and Whizzer, another person who was given abilities he didn't ask for.

Aside from what Jessica has been learning from her flashbacks, she also got some information from the mysterious female villain this season. Jessica sat down with her at a bar, even though the woman wanted to meet with Trish, and the lady made some interesting claims. According to her, IGH saved Jessica's life. She had actually died in the car crash, but IGH brought her back and Jessica's abilities were merely a side effect of that. The woman told Jessica she should be thankful, but obviously Jessica didn't agree.

Although it's a little hard to trust this woman who clearly believes IGH is a godsend, one has to wonder why she would lie about that. So did Jessica actually die in that car crash along with her parents and did IGH save her life? It certainly seems likely, but that doesn't really mean the people assocated with IGH are actually good people. Bad people sometimes do good things, after all. Plus, that still doesn't fully explain everything that IGH did to her.

Thankfully, Jessica is getting closer and closer to discovering the truth. At the end of Episode 5, she found Dr. Karl, a man who worked (or still works) for IGH. He was at the aquarium with the mystery woman Jessica had fought before, and it's clear the two are in a romantic relationship. Jessica also remembered Dr. Karl from a flashback, so it's obvious he played a role in making Jessica into the superhuman that she is today.

Still, there are a number of questions that still need to be answered. Why did IGH become so interested in Jessica in the first place? She wasn't the only person in that car, so why did they choose to experiment on her instead of the rest of her family? And why did they just let her go back to the hospital after experimenting on her? Was she just a lab rat to them or was there something deeper going on?

And what about the mystery woman who also has abilities, even stronger than Jessica's? She's obviously involved with IGH, and they clearly experimented on her too, so how does she fit into everything? That's difficult to say, but at least Jessica seems to be on the right track now. Hopefully, she'll be able to get all the answers she's looking for before the end of this season.