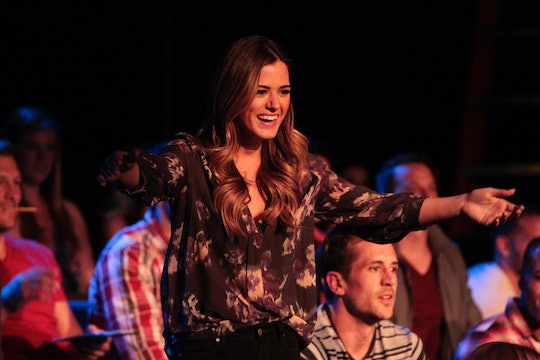 What Did JoJo's Magazine Article Say On 'The Bachelorette'? Her Ex Gave A Shady Tell-All

After Jordan gets a second one-on-one date with JoJo — the first international date of the season — the guys start to get a little salty. Vinny finds a few gossip magazines with alleged dirt on both JoJo and Jordan. So what did JoJo's magazine article say on The Bachelorette? Needless to say, its existence in the first place starts a frenzy of rumors amongst the guys accusing JoJo of being there for the "wrong reasons."

The article in question was an InTouch interview given by JoJo's ex Chad Rookstool. (No, not the Chad on this season of The Bachelorette; the other unfortunate Chad in JoJo's life, whom she dated before Ben and who left a bouquet with a "please take me back" note for her during a late-stage Bachelor episode last season.) In the article, he alleges that JoJo came crawling straight back to him when Ben dumped her.

"As soon as she got home, we started hanging out every day and being intimate again,” Chad told InTouch. "We were sneaking around the whole time The Bachelor was airing because she wasn’t allowed to be seen with me."

"When she got home, she kept telling me she loved me and that we should have stayed together and fought through our issues," Chad added. "She said we would’ve been married by now, and I agreed with her."

When JoJo's name came up for The Bachelorette, she allegedly left Chad again and he claims he told her that he wouldn't wait for her that time. Uh, probably for the best, considering all JoJo does is talk about what a toxic dude this guy was who systematically chipped away at her self-esteem and led her to feel insecure all the time. She credits Ben with teaching her that she was capable of snagging nice guys who would treat her well, and for inspiring her to search for better. It doesn't sound like Chad has much of a chance anyway.

And even if JoJo did have a momentary lapse of judgment in which she fell back into his arms (a move she denied to the guys when giving them a tear-filled explanation of the article), plenty of women (and men!) can relate to re-visiting a toxic headspace in a moment of hurt and insecurity. Thankfully, the whole thing blew over after JoJo had a heart-to-heart with the group and they all seemed to trust her again afterwards. Crisis averted. Now can we please ban all the Chads to Hurricane Olivia Island?