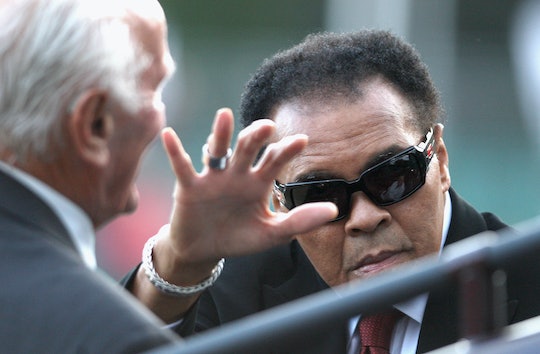 What Did Muhammad Ali Die Of? It Wasn't What You Assume

The world awoke to some sad news Saturday morning when it was announced that Muhammad Ali died late Friday evening. Known to fans and non-fans alike as The Greatest, the boxer passed away at the age of 74, leaving behind family, friends, and a legacy that will live on till the end of time. As news of his death spread on social media, many wondered what did Muhammad Ali die of and whether or not it was related to his longtime battle with Parkinson's disease.

As expected, the initial news of Ali's death was free of any specific details. "After a 32-year battle with Parkinson's disease, Muhammad Ali has passed away at the age of 74," Bob Gunnell, a family spokesman, told NBC News on Friday night. "The three-time World Heavyweight Champion boxer died this evening." Given this statement, many may have been quick to jump to the conclusion that the boxer died of Parkinson's disease. And although the disease might be related to his death, it is not necessarily the cause of it.

Ali has been hospitalized two days prior to his death with respiratory issues, according to CNN. At the time, Gunnel reported that the three-time World Heavyweight Champion was in fair condition and that "a brief hospital stay" was expected. Things quickly took a turn for the worse, with Ali's family rushing to be by his side. Though this was the athlete's most recent hospitalization, it was one of several that occurred over the past few years. CNN noted that Ali had been hospitalized with a urinary tract infection in January 2015, and Time reported that he has been hospitalized with pneumonia in December 2014.

But the question still remains: did Ali die of Parkinson's disease? And the answer is no.

Ali first started showing symptoms of Parkinson's disease after retiring from boxing in 1981, according to The Guardian. He was officially diagnosed three years later in 1984, with many assuming that he developed the disease after suffering multiple blows to the head through his boxing career. Always a fighter, Ali established the Muhammad Ali Parkinson Center in 1997 to not only find a cure for the disease, but to also raise awareness and provide support to those who suffer.

Though Ali's death is a tragic one, it serves a reminder that the medical community can't slow down its attempts to find a cure for Parkinson's disease and that the community as a whole must continue to offer support to those who suffer form it.