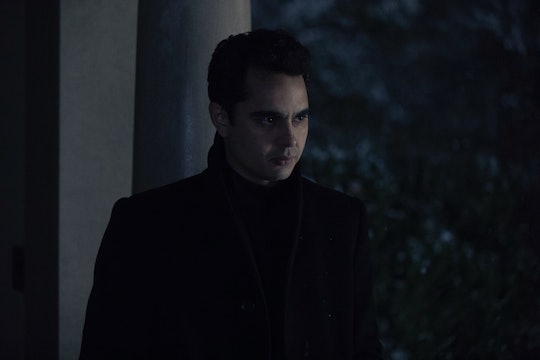 Nick's Shocking Past Is Finally Revealed On 'The Handmaid's Tale'

So far, Season 3 of The Handmaid's Tale has been about June's fight to keep her daughter safe, but her baby daddy, Nick hasn't really been around. Now, in the latest episode, titled "Household," Nick and June meet again in Washington D.C., and this time, fans finally learn some clues about his mysterious past. June is shocked to hear the truth, but exactly what did Nick do on The Handmaid's Tale?

Warning: Spoilers ahead for Season 3 Episode 6 of The Handmaid's Tale.

While many of the other main characters — like June and the Waterfords — have had their backstories revealed in a series of flashbacks, the show never really dove into Nick's history. In Season 1, Episode 8, fans got a tiny peek into some moments of Nick's life before Gilead. He was an unemployed college graduate looking for direction, and after meeting his mentor, Andrew Pryce, he joined the religious group, the “Sons of Jacob.” Once Gilead and this extremist religion take over the U.S., Pryce sends Nick to work as a driver for the Waterfords.

While working at the Waterford home, Nick meets June, and the two fall for each other. Serena — who realizes that Fred is unable to father a child — is desperate for June to get pregnant, so she takes June to Nick's apartment and orders them to make a baby. Eventually, Nick and June develop feelings for each other, and when June does get pregnant, their relationship grows even stronger. Through it all, you can see Nick questioning Gilead's rules, and by Season 2, he helps June escape. At the end of the second season, Nick — who seems to be playing a double agent — becomes a Gilead Commander, but he still does what he can to help June and the rebel's cause.

At the beginning of Season 3, Emily escapes Gilead with baby Nichole, so the Waterfords launch a public video campaign to force the Canadian government to send Nichole back. When a Swedish envoy is sent to Gilead for negotiations, June tells them that Nick is the baby's real father, and that he'll meet with them as long as they promise to keep her baby in Canada. Nick comes to visit June that night, and she tells him about the deal with the envoy. Nick is reluctant about the whole deal, but after a little emotional push from June, he agrees to go.

But the next day, the Swedish envoy tells June that Nick never showed up, and that he left for Chicago. She also tells her that after digging into Nick's past, they realized they could never really trust him. June is understandably upset, and when she’s alone with Serena, she asks her what Nick did before he was their driver. “He served Gilead,” Serena says. “He was a soldier in the crusade. We wouldn’t be here without him.”

Nick is then seen on a train (presumably to Chicago) surrounded by soldiers who all salute him as he walks by, which indicates Nick’s substantial military clout. In Season 1, when Nick would report back to Pryce, it seemed like he was working undercover at the Waterfords, so it’s possible that he’s been a loyal military implant the whole time.

In an interview with Bustle, actor Max Minghella talked about why his character, Nick, is so unpredictable. "He’s a self-preserver," said Minghella. "He’s somebody who’s constantly trying to be conscious of the political minefield. He has to be very savvy in a way that I am not in real life. He’s always one step ahead, always got something up his sleeve."

Now that Nick is on his way to Chicago, it doesn’t look like he’ll be coming to help June or baby Nichole anytime soon. But if he does have a larger plan in the works, you never know when or how he’ll pop up again.