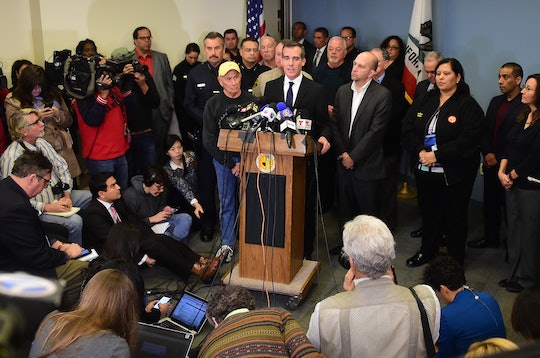 What Did The Email That Shut Down The L.A. Public School System Say? Now We Know

In our frightful, post-Columbine era where mass shootings for acts of revenge have become a form of domestic terrorism, it's hard to imagine anyone would think pulling a terror threat hoax would be prank-worthy. But that's exactly what happened on Dec. 15, when an email threat shut down the L.A. public school system. But exactly what did the email that closed L.A. schools say? Let's begin with the fact that the email was sent from C**kmail. Unfamiliar with this hosting service? Yeah, I was too. Then again, I'm not down with 4chan or 8chan, a bulletin message service that lets users post all sorts of images (and from the looks of it, a lot of them are NSFW and certainly not deemed permissible by Islam).

Look, I'm a college professor, and it's finals week. I don't want to go to school any more than I want to go to the dentist to get my wisdom teeth removed without laughing gas. But what's really alarming here is the state of panic that has engulfed our nation, so much so that kids are using this heightened anxiety as a way to get out of school — and it's working.

So what did the email say, exactly? Here are a couple choice excerpts:

Something big is going down. Something very big. It will make national headlines. Perhaps, even international ones. You see, my last 4 years here at one of the district high schools has been absolute hell. Pure, unmitigated, agony.

I totally get it! High school is certainly not a cakewalk. But...

If you do end up trying to, by perhaps, beefing up security, or canceling classes for the day, it won’t matter. Your security will not be able to stop us. We are an army of Allah. If you cancel classes, the bombings will take place regardless, and we will bring our guns to the streets and offices of Los Angeles, San Bernardino, Bakersfield, and San Diego.

I wish you the best luck. It is time to pray to allah, as this may be your last day.

Aside from the pornographic email address and hosting service, the word "Allah" is spelled with a lowercase "a." However, the what really made the email less than credible was the email address that it came from: C**k.li email Hosting. Not exactly Halal approved. In a press conference on Dec. 15, L.A. Police Chief Charlie Beck said hindsight is 20/20. "It is very easy in hindsight to criticize a decision based on results the decider could never have known."

In defense of the decision that shut down 900 different public schools, keeping as many as 640,000 students home for the day, L.A. superintendent Ramon Cortines said during a press conference on December 15, "I am not taking the chance to bring children into any part of the building until I know it is safe. It was many schools, not specifically identified." In other words: better safe than sorry. But are bomb threats really the new snow day?

I don't have a solution. I'm just glad I wasn't in charge of making the decision that Cortines had to make. But I do think that more open dialogue between parents and their children, as well as educators and children needs to happen about terror threats and the state of our nation. Obviously, the news that's infiltrating our newsfeed is affecting kids.

Though all of this is a hard pill to swallow, parents and educators must, so that we don't indeed play into terrorists' hands, and live our lives in constant fear.