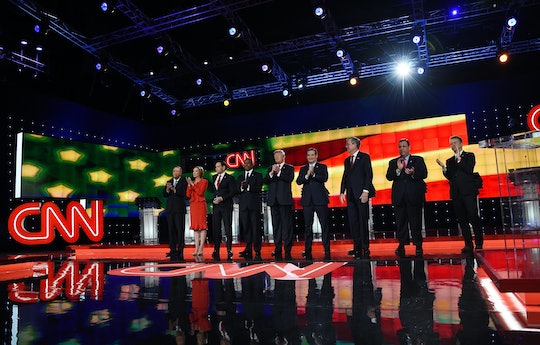 What Did The GOP Debate Heckler Say? Here's What We Know

As Donald Trump took a breath to answer a question thrust on him by Wolf Blizter, a comment erupted from the audience that derailed Trump's response, and the booing didn't stop there. But what did the heckler at the GOP debate say? Well, the comment lasted less than 10 seconds, but it was long enough to send a major message to Trump, to Blitzer, to the rest of the GOPs on the stage, and to viewers watching and following at home. People are growing more and more tired by Trump's insanely bigoted, misogynistic, racist, and intolerant comments. Not only are they speaking up — they're speaking at incredibly inopportune times for the candidate.

While we don't yet know what exactly the person in the crowd said, we do know that that Trump's heckler was "shouting about money in politics, about how Americans don't want more billionaire politicians." The protestor was then escorted out of the CNN debate taking place in Los Vegas by a police officer. It's reported at this time that there was no more drama following the comments.

Earlier in the week at a Las Vegas rally the night before the GOP debate, Donald Trump was also interrupted by protestors. Protestors yelled "Black lives matter!" while another shouted about the need for stronger gun control. As one person was escorted out of the rally, another yelled, "Shoot him!" "Kick his ass," and, "Light the motherf*cker on fire!" The horror of the night does not end there, unfortunately. Another person reportedly said, "Sieg heil!"

In the video below, captured by Dylan Byers, a Senior Reporter for Media & Politics at CNN who was seated just seats away from Trump's heckler, reveals what was said. The video is captioned "Kai Newkirk of '99 Rise' protesting 'billionaire politicians,'" though it's important to note that no one has confirmed it was Newkirk:

It's still incredibly hard to make out exactly what the individual was saying, but you can clearly see he was escorted out by security for the event as well as another woman.

According to its website, 99Rise is a "network of activists and organizers dedicated to building a mass movement to reclaim our democracy from the domination of big money." They go on to sat that they "believe that only by getting big money out of politics — by willing a democracy that responds to the real needs of "the 99%" — will we open the door to finally realizing the progressive promise of the American Dream."

Shortly after, Newkirk tweeted a claim saying that the interruption at the GOP debate stemmed from him: