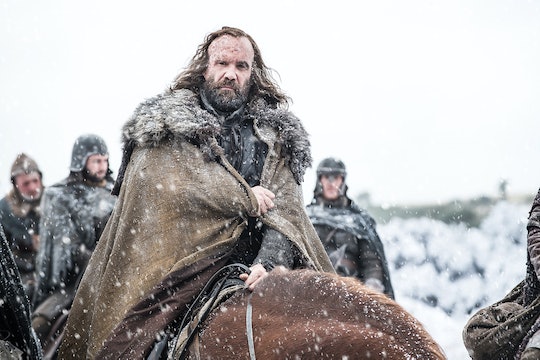 The Hound's Vision On 'GoT' Could Be Very Important

So far on Game of Thrones, religion has played an unexpectedly large role. While most people in Westeros worship The Seven, the few that follow The Lord of Light or the Red God, also known as R'hllor, are becoming much more important. These followers may even include Sandor Clegane. So what did The Hound see in the fire on Game of Thrones? He had a vision that's going to be pretty difficult to ignore.

It's becoming fairly evident that the Red God does not mess around. While it was at first easy to dismiss his followers as fanatical and gullible, viewers at this point have seen them do some remarkable things. Melisandre and Stannis killed Renly Baratheon with their R'hllor-sanctioned smoke baby they conceived, for starters, which convinced Ser Davos at the very least that Melisandre can do some powerful things, if not making him a true believer. She also brought Jon Snow back from the dead, and The Hound himself has seen Thoros of Myr bring Beric Dondarrion back to life. Throughout the series, The Hound has been a die-hard cynic with no time for things like religion, but after seeing a vision in the flames, it could be possible that he's starting to have a little faith.

The other hallmark of the faith of the Red God (aside from the occasional pointless human sacrifice) is seeing visions of the future in the fire. Thoros invited Clegane to look into the flames and tell him what he saw while they were sitting in the farmhouse (once owned by a poor family Clegane robbed in Season 4). At first the disdainful Clegane said that all he saw was "logs burning." But when he looked closer, he described seeing a wall of ice "the wall," and a huge army of the dead marching past a castle where the wall meets the sea. This vision means a couple of things. On a micro-level, it means that Clegane now must reevaluate his faith in religion, which could result in him becoming just as much a fanatic as Thoros and his "topknot."

The other important thing to consider with Clegane's vision is what it means for the coming action. Clearly, the White Walkers are making moves in Westeros, and they're intimidating enough to terrify The Hound. Fans have deduced that the castle The Hound mentioned is Eastwatch-By-The-Sea, a coastal fortress of the Night's Watch. If you've been paying attention, you'll remember that this is the castle where Jon has just sent Tormund, the friendly warrior Wildling, to guard. I don't know about you, but I have a feeling this fortress is going to be very important later in the season.