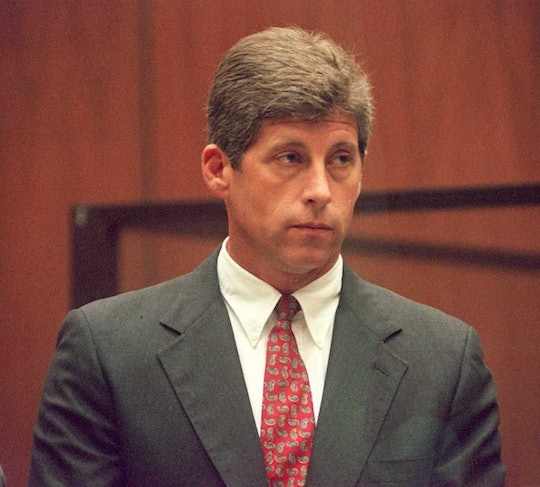 What Did The Mark Fuhrman Tapes Say? They Were Crucial To The O.J. Simpson Trial

When The People vs. O.J. Simpson: American Crime Story first introduced Detective Mark Fuhrman as a witness for the prosecution, it hinted that there was something deeper going on with the officer. Prosecutor Christopher Darden hadn't wanted to use Fuhrman from the start, but he was overruled by Marcia Clark, and it seemed like Fuhrman's initial time on the stand went without too much incident. Defense attorney F. Lee Bailey questioned Fuhrman about his use of the n-word in an attempt to bolster the defense's theory that Fuhrman had planted evidence to implicate Simpson in the murders because Fuhrman was a racist. Fuhrman denied having used the word any time in the last 10 years. Then, in a twist that no one saw coming, tapes came out that proved he was lying. But what did the Mark Fuhrman tapes say?

The profanity-laden recordings took place over a period of almost 10 years, from 1985 to 1994. Fuhrman was being interviewed by a woman named Laura Hart McKinny, a screenwriter working on a script about female officers. She had sought out Fuhrman because he was known to have strong opinions about women on the force. The result was a series of tapes wherein Fuhrman revealed not only the depth of his misogyny but also his racism, using the n-word "approximately 42 times" in casual conversation.

If you wanted to listen to them, portions of the tapes can be found on YouTube, but they aren't an easy listen. Fuhrman describes police brutality with chilling ease and discusses the violence with which they would handle suspects as though it were commonplace. He talks openly of making the evidence fit once officers had decided someone was a suspect. It was shocking not only because it cast such extreme doubt on Fuhrman's testimony but because it exposed the dark underbelly of the LAPD at a time when the 1991 riots were fresh on everyone's minds.

"It's like my partner now. He's so hung up on the rules and stuff. I get pissed sometimes and go, 'You just don't even f*cking understand. This job is not rules. This is a feeling. F*ck the rules; we'll make them up later. . . . He doesn't know how to be a policeman. 'I can't lie.' . . . Oh you make me f*cking sick to my guts. You know you do what you have to do to put these f*cking assh*les in jail."

The tapes also revealed one more surprise: in them, Fuhrman discussed presiding Judge Ito's wife Peggy York, an important figure in the police department, in less than flattering terms. The whole ordeal was brought in front of a second judge to determine if Ito could continue on the case, which he ultimately did. York ended up not having to testify, as the statements about her were not relevant to the case.

While the tapes proved too big and controversial to be suppressed, the jury was prevented from hearing more than the two sentences that proved Fuhrman had committed perjury when he claimed to have not used the n-word in the last ten years. Of all the inflammatory things Fuhrman said, here are the only two sentences — 12 words — the jury was able to hear:

However, the damage was done anyway — the tapes had been heard in court in full (though not in the presence of the jury), and the press ran with explicit quotes. After an investigation, the LAPD determined that Fuhrman had been exaggerating the circumstances he described to McKinny — at least in some instances.

After the tapes were allowed, Fuhrman chose to plead the 5th Amendment to any questions placed to him. Part of what has made The People v. O.J. Simpson so exceptional is its dedication to accuracy, with limited embellishment for dramatic effect. The trial, as Darden says in the episode "Manna From Heaven" (and said in real life), was a "circus," and what makes it all the more remarkable is how much of its insanity is true.