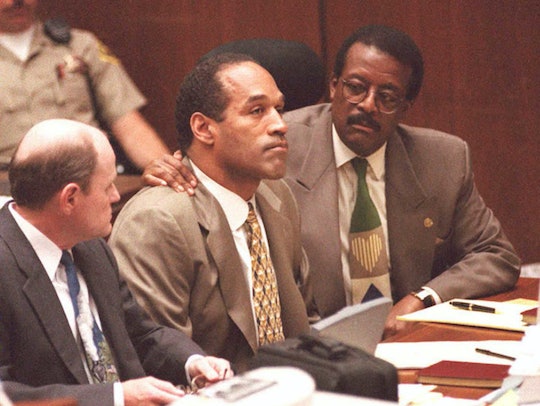 What Did The O.J. Simpson Juror Hand Symbol Mean After The Verdict Was Read? It Was Important To The Trial

There are many surprising things that happened during the O.J. Simpson trial, but one of the most surprising things was the verdict, which came after only a few hours of deliberation. On The People v. O.J. Simpson, the verdict is shown, cut with real life footage of the public's reaction to the acquittal. On the show, as the jury leaves the courtroom, one juror turns around and gives Simpson a hand signal, which seems to catch Simpson off-guard. So, what did the O.J. Simpson juror's hand symbol mean? It was just one more thing that proves that this case was so much more than the murders of Nicole Brown Simpson and Ron Goldman (which O.J. Simpson was found not guilty for).

When the verdict was read in the courtroom, announcing that O.J. Simpson had been acquitted for the murders of Brown Simpson and Goldman, things became hectic — to say the least. Watch any of the news footage from that moment and you'll realize that this verdict truly split the public. One moment, which actually happened in the courtroom was when a juror turned to Simpson and gave a hand signal that many might be wondering the meaning of. According to the New York Times:

After the verdict, one of two men on the panel, a black marketing executive who Robert L. Shapiro, one of Mr. Simpson's lawyers, said had once been a member of the 1960's-era Black Panther Party, gave what looked like a black power salute, a fist raised in the air.

The Black Power salute rose to prominence during the Civil Rights Movement. It gained a lot of notoriety during the 1968 Summer Olympics when gold medalist Tommie Smith and bronze medalist John Carlos raised their fists during the national anthem. Both athletes received punishment for their display. Both were suspended from the team and received death threats, according to Time. Below is another photo of the the USA team of 400 meters relay also holding up the clenched fist.

The symbol went even more mainstream when the Black Panther party started using it during the height of the Civil Rights Movement. Even now, the symbol is very much present. After Beyoncé's Super Bowl performance, dancers held their clenched fists in the air with Black Lives Matter activists.

It is a very powerful moment during the trial, because it shows how much bigger this case was than just a murder trial (which is sad in itself, since there were two people that died and never got justice). It just proves how significant this trial was to our legal system and to the nation at the time. It was a murder trial, yes, but it was also about celebrity and race, too.