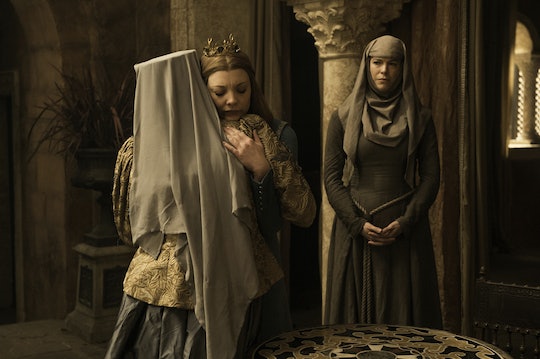 What Did The Rose Mean On 'Game Of Thrones'? There's More To The Tyrells Than You Think

I think we all know Margaery Tyrell well enough now to know that her motivations and actions are never quite what they seem to be. She might have convinced the realm of her recent conversion to religious zealot, but personally, I never bought it for a minute. On Game of Thrones, the rose is the sigil of House Tyrell, and when Margaery gave her grandmother, Lady Olenna, a note with a simple drawing of a rose, she was confirming her loyalty to her house and her family above all else, so they wouldn't be fooled by her sudden piety.

The Stark direwolf, the Lannister lion, and the Targaryan dragon are all fearsome symbols of their respective houses, reflecting a serious don't-mess-with-us attitude. The rose symbol of the Tyrells is a bit more subtle, but no less apt. While the rose ostensibly represents the fertile agricultural richness of the Tyrell's turf at Highgarden (which has made them the richest house in the realm besides the Lannisters), it includes a warning as well. While looking at the beauty of the flower, people often forget the dangerous thorns right beneath. It could even be interpreted as a reference to a famous line from Macbeth, in which Lady Macbeth advises her husband to "look like the innocent flower, but be the serpent under it." Nobody epitomizes this Tyrell character trait better than Margaery.

To all outward eyes, Margaery is the perfect queen. She is beautiful, kind, docile, and infinitely generous to the poor. But she is also sneakier, more cunning, and smarter than any of this suggests. She knows exactly how to act to gain the love of the masses, all with her own hidden agenda. This is why she beats Cersei at every turn. While Cersei has never tried that hard to conceal any part of her own character, Margaery is twice as conniving while appearing to be twice as good.

Margaery surprised everyone, including her own family, when she "repented" and seemed to join forces with the High Sparrow, even going so far as to bring King Tommen over to the side of religion. I would be extremely surprised if this was anything more than a very shrewd political move. The High Sparrow basically told Margaery that her grandmother was next to be thrown into the dungeon and read scripture by a terrifyingly stern Septa Unella. Margaery swiftly reacted by telling Lady Onella to get the hell out of dodge, with a little picture of a rose to remind her that she is not what she seems to be, proving Margaery has something up her sleeve. We just have to find out what that is.