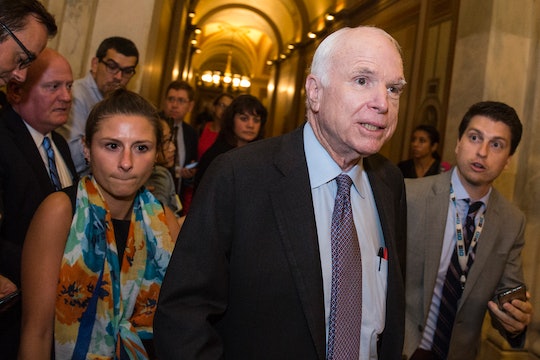 In a dramatic move early Friday morning, Arizona Sen. John McCain cast a vote against the GOP's plan to repeal Obamacare, effectively killing the bill. According to CNN, McCain said he did so because he was opposed to the party's lack of transparency and didn't think the repeal would ensure actual health care reform. But chances are that didn't go over well with President Donald Trump, who spoke to McCain ahead of the vote, in what was likely an attempt to secure his support. What did Trump say to John McCain on the phone before he ultimately voted against the repeal? It certainly didn't seem to influence his decision.

Though McCain seemed pretty decisive on the Senate floor Friday morning, it was an outcome that surprised many — in part because McCain's "no" vote came after he voted twice in support of advancing the bill earlier this week. But the senator seemed to be very clear on his intentions prior to taking the floor for the final vote: while he didn't provide any specific details to reporters before his big moment, he did hint at what was to come, according to The Independent, telling them to "watch the show."

McCain's decision to go against his party and vote the bill down "drew gasps in the chamber and applause from Democratic senators," according to The Independent. But according to CNN, a number of Republicans attempted to talk him into voting yes in the hour leading up to the vote, including Arizona Sen. Jeff Flake, and Vice President Mike Pence. But that wasn't all: sources have said that, at one point, Pence took a call from Trump, and then handed the phone to McCain, reportedly so that the president himself could try and talk him out of derailing the bill.

McCain and Trump have certainly had a rocky political relationship. While running for president, Trump drew sharp criticism for claiming at an event in Iowa that McCain — Navy veteran and Vietnam POW — was “not a war hero," and that he “[liked] people who weren’t captured,” according to Newsweek. But in the lead-up to the important health care reform vote in the Senate, Trump publicly praised McCain on Twitter following news of his recent brain cancer diagnosis, writing that he was "brave" and an "American hero," for returning to vote.

It's clear though, that Trump's words weren't enough to sway McCain, and in a follow-up tweet Friday, the president took him to task, along with Alaska Sen. Lisa Murkowski and Maine Sen. Susan Collins, who have both long rejected the GOP's proposed health care plan.

While Trump didn't name them specifically, he wrote he expressed his frustration over the "3 Republicans" whom he claimed "let the American people down" by voting against the bill, and suggested that all that was left now was to watch Obamacare fail on its own.

It's not known whether Trump and McCain have spoken since the vote, but given that the loss of Senate support signals a huge defeat for Trump — repealing Obamacare was one of his main election promises, and would have been his first major legislative victory, according to The Guardian — it seems pretty safe to assume that if and when they do discuss the outcome, it won't be a very friendly conversation.

Yet that may not particularly worry McCain. In a statement released Friday, McCain seemed confident in his decision, explaining that while he has always been in favor of repealing Obamacare, he couldn't in good conscience support the GOP bill in its current form. He said,

From the beginning, I have believed that Obamacare should be repealed and replaced with a solution that increases competition, lowers costs, and improves care for the American people. The so-called ‘skinny repeal’ amendment the Senate voted on today would not accomplish those goals. While the amendment would have repealed some of Obamacare’s most burdensome regulations, it offered no replacement to actually reform our health care system and deliver affordable, quality health care to our citizens.

And according to CNN, it sounded like he wasn't at all conflicted about his choice. When asked just prior to leaving the Senate after the vote why he ultimately voted against his own party, McCain replied that "it was the right vote" — suggesting, perhaps, that as far as John McCain was concerned, there wasn't much Trump could have said in that last-minute phone call that actually would have changed his mind.