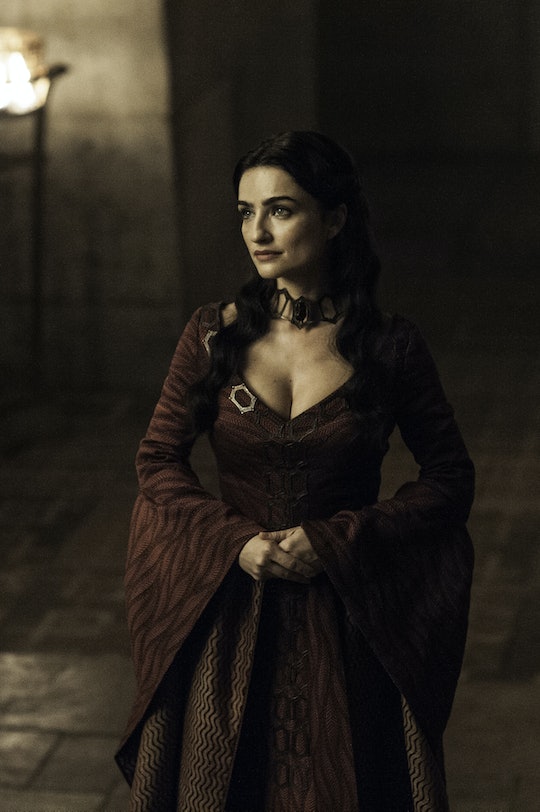 What Did Varys Hear In The Fire On 'Game Of Thrones'? He Might Not Even Know

Though we are all still reeling from Bran's narrow escape from the White Walkers, and Hodor and Summer's tragic sacrifices, other things did in fact happen on Sunday night's episode of Game of Thrones. All of our major characters seem to be making moves, including Tyrion, the Olivia Pope of Meereen. Unlike Missandei and Grey Worm, for example, Tyrion does not shy away from making unusual or even unsavory alliances, as we saw last week when he attempted to deal with the Masters, and this week, when he met with a Red Priestess named Kinvara. Varys is skeptical, which is understandable considering it was a Red Priest who castrated him as a boy, but when Kinvara asks if he remembers the voice that spoke when the priest threw his parts in the flames, Varys is struck silent. What did Varys hear in the fire on Game of Thrones?

Well according to the books, not even Varys knew. When he described the haunting story of his castration to Tyrion in the books, he said that when the priest threw his parts into the fire, he heard a strange voice speaking a language he could not understand. He was drugged and in pain, and he often told himself that he must have hallucinated the voice. This experience, understandably, has lead Varys to hate magic and all who practice it, which would explain his extreme distrust of this new Red Lady.

Varys also makes the excellent point that the one Red Priestess he knew, Melisandre, believed that Stannis was the Prince That Was Promised, a.k.a. Azor Ahai, a.k.a. the hero figure who is predestined to save the world, and that turned out to be spectacularly false (see: Blackwater Bay, where Stannis was soundly defeated). Kinvara responds that while the Lord of Light is always correct, men can err in their interpretations. Kinvara believes that Daenerys is Azor Ahai, and she pledges to serve her faithfully no matter what. They serve the same queen, she reminds Varys. Interestingly, while Varys may be distrustful of magic and more than a little skeptical of the whole Messiah idea, he too believes that Dany is the key to saving Westeros. His stated goal has always been simply the good of the realm, and that is why he came to help the Dragon Queen to begin with.

Is it possible that the voice in the flames predicted something about Daenerys Targaryen, and Varys has been an unwitting servant of R'hllor all this time? Could he have unconsciously understood what the voice was saying, and it was telling him to serve her? It's just one theory, but chances are good that the truth of the voice will be unlike anything we expect.