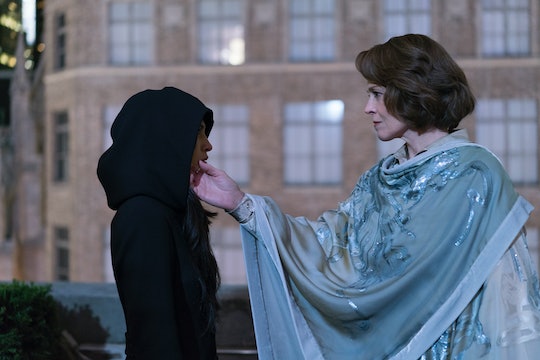 Alexandra Receives Some Terrible News On 'The Defenders'

In Netflix's newest Marvel series, Matt Murdock, Jessica Jones, Luke Cage, and Danny Rand must team up against a new adversary named Alexandra. As of right now, she's still a bit of a mystery, but there's one thing that's become clear: she's dying. So what disease is killing Alexandra on The Defenders? It's difficult to say so far. (Warning: spoilers ahead for Episode 1 of The Defenders!)

In the premiere episode, Alexandra goes to the doctor to get an MRI, though it's unclear why. However, when she talks to her doctor it's revealed that she has a low red blood cell count and most of her organs are failing. To make matters worse, there's nothing that can be done to save her. At least, not medically.

The doctor said she has months, maybe only weeks to live. Whatever it is that's killing her, it's obviously a serious disease. Since there was no mention of chemotherapy, it doesn't seem like it's cancer, but it's definitely a fatal illness.

Because of her sickness, Alexandra is forced to move up her timeline with The Hand. During her meeting with Madame Gao, Alexandra makes it clear that their plans must move quicker, though she doesn't tell Madame Gao why. It's possible Madame Gao and the other people Alexandra is working with don't know that she's dying. Though Alexandra certainly doesn't have to tell people about her illness, one has to wonder why she's hiding it.

Perhaps Alexandra's keeping it a secret because she has another plan for The Hand and Black Sky aka Elektra, who has become a weapon for the organization. Prior to this transformation, she was romantically involved with Matt Murdock (Daredevil), though right now he believes her to be dead.

If the Black Sky can somehow heal Alexandra, it'd make sense that she would want to keep that information to herself. Everyone would want to use Black Sky for themselves if they knew that was a part of Elektra's abilities, but can Elektra really heal someone? She was brought back from the dead; maybe that gave her healing abilities as well.

However, if Elektra could actually heal Alexandra, why hasn't she done it already? It seems more likely that Alexandra cannot be saved, hence her urgency in following through on whatever her plans are with The Hand. Either that or whatever her endgame is in this plan results in helping her to be cured and/or become immortal. Right now, her main objective seems to be to destroy New York and rebuild from the ground up, but it wouldn't be surprising if she has a bigger goal in mind.