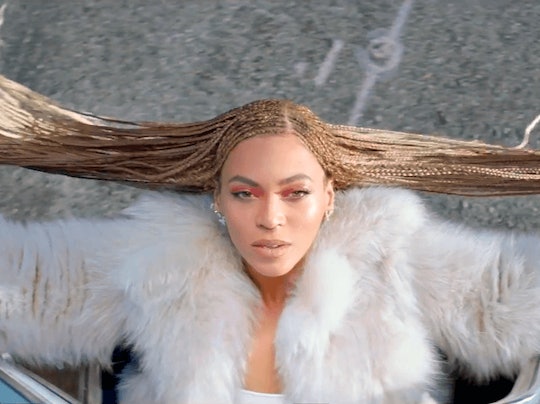 What Do Beyonce's "Formation" Lyrics Mean? There's So Much Substance To The Single

Oh man — this is the weekend that just keeps on giving. Beyoncé has surprised us all with a brand new single — "Formation" — released only one day before our beloved Queen Bey is set for a guest appearance at the Super Bowl Halftime Show on Sunday. It's a fierce tune, hypnotic in its beat and stunning in its visuals: "Formation" is what would happen if Beyoncé, artist Matthew Barney, and the entirety of American Horror Story: Coven all had a crazy musical baby together. And it. Is. GLORIOUS. Still, the song might have you scratching your head — so what do Beyonce's "Formation" lyrics mean?

There's a lot to take away from Beyoncé's new song and accompanying video: Lush, evocative images paint a portrait of a post-Katrina Louisiana ("What happened after New Orleans?") are juxtaposed with period costumes that invoke everything from the antebellum South to 1980s street fashion. But even if you haven't seen the Beyoncé's "Formation" video yet, there are plenty of themes you can pick up on right away just from listening to her newest single.

Right away, Beyoncé gets at the soul of the concept of "Formation" — as in family formation. Featuring absolutely adorable shots of her daughter, Blue Ivy, Beyoncé calls right out to her roots early on in the song with a nod to her parents — father Mathew Knowles was raised in Gadsen, Alabama, and mom Tina Beyincé-Lawson has deep roots in Louisiana history — then mentions her own Texas upbringing:

You mix that negro with that Creole make a Texas bamma

"Formation" Gives Credit Where It's Due

Sometimes it's astonishing to remember that Beyoncé has an estimated net worth of $250 million — and yet the diva superstar is only 34 years old. As a soon-to-be 34-year-old myself, I'm just excited that I managed to put on not sweatpants on a Saturday. Beyoncé's path to international stardom has been one of incredibly hard work; without her relentless drive, she wouldn't have gotten to where she is now. Beyoncé owns her incredible work ethic in "Formation" — as well she should, too:

I dream it, I work hard

I grind ‘til I own it

I twirl all my haters

Sasha gets her fierce on with pulsating repetitions of "I slay" and "Okay" as she dances in formation with other dancers across several motifs: In a school gymnasium dressed in athletic-inspired outfits, in decadent 19th century-esque decor and garb, and in 1980s denim splendor in a vacant parking lot. "Formation" isn't just about how things come to be — it's about killer dance moves:

Okay, okay, ladies, now let’s get in formation, cause I slay

Okay ladies, now let’s get in formation, cause I slay

Prove to me you got some coordination

Slay trick, or you get eliminated

Every listen of Beyoncé's "Formation" just reveals more and more layers of commentary and meaning — and I think I'm going to have to take yet another listen myself right now. Join in by watching the video below (FYI: it's the dirty version, if you've got sensitive ears around):