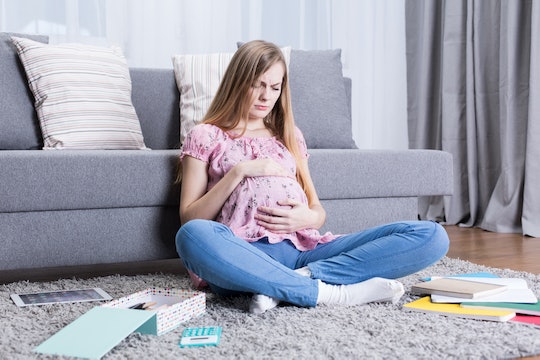 As you near the end of your pregnancy, your body will start to do some pretty strange things (as if pregnancy in general isn't strange enough) to prepare your body for delivery. You're likely to experience some practice contractions, otherwise known as Braxton Hicks contractions, that will supposedly "prime" your uterus for the "real deal." If you've never experienced one before, you're no doubt asking yourself what do Braxton Hicks contractions feel like and what is their purpose in the first place.

Most moms, according to Baby Center, describe Braxton Hicks contractions as a tightening feeling. They're usually painless, although they can feel strange and sometimes uncomfortable. Your abdomen will likely feel hard to the touch, and you may feel the sensation from the top of your belly all the way to your groin in some cases.

You may notice Braxton Hicks contractions as early as your second trimester, but the American Pregnancy Association (APA) noted that they're most common during the final weeks of pregnancy.

It's normal to worry about confusing Braxton Hicks contractions with true labor contractions, but once you know the difference between the two, it's easier to differentiate between the two. According to the APA article sourced above, Braxton Hicks contractions are always irregular and don't increase in frequency or intensity. They'll occur randomly, often after you've been standing or walking for long periods of time, or sometimes for no reason at all. Furthermore, they're not usually painful. True contractions, on the other hand, occur regularly and increase in frequency and intensity.

If you think you're experiencing a Braxton Hicks Contraction, Baby Center recommended changing your position, lying down, elevating your feet, or trying deep breathing to help you relax (especially if you're uncomfortable during the practice contraction.)

Like most aspects of pregnancy, Braxton Hicks are different for every mom. Some experience them all the time, while others never actually feel them. Whatever your case may be, know that they're simply your body doing its job prepping you for the most exciting day of your life.