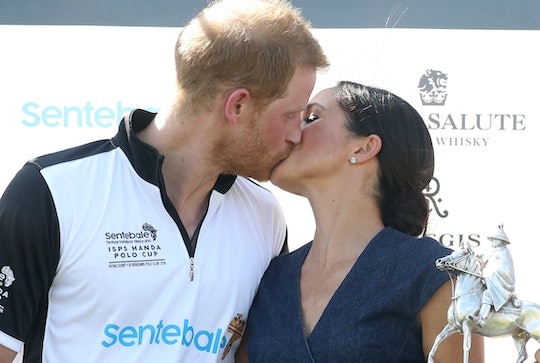 ABC's new two-night documentary, The Story of the Royals, focuses on the history of the monarchy and Americans' obsession with it, but what do British people think of the royal family? Their feelings are mixed.

Just like Americans, there are many Brits who love the royal family. They eat up news about the monarchy and enjoyed watching Prince Harry and Meghan Markle's wedding just like so many of us. It was the Brits who were standing outside of the church on their wedding day after all. That said, as much as British people may celebrate the monarchy, there are many who are over it.

Prior to the royal wedding earlier this year a petition was started asking that no taxpayer funding be used for the royal wedding. "We petition the UK parliament to commit no public money to the wedding of Prince Harry and Meghan Markle, and to call upon the government to publish a report of all costs to taxpayers," the petition read. It also added, "If Harry and Meghan want to turn their big day into a public event, they need to pick up the bill — all of it." The petition almost reached its goal of 35,000 signatures with 33,813 signatures.

With Princess Eugenie's upcoming nuptials, the conversation about taxpayers having to pay for royal weddings has been sparked again, with many Brits arguing it is not fair their money is being used for these weddings instead of the royal family's own money. According to Cosmopolitan, the wedding is costing taxpayers two million pounds. To put that in perspective, that is more than $2,500,000.

That said, not all United Kingdom residents are in favor of abolishing the monarchy. In fact, reports suggest that less than a fifth of Brits support abolishing the monarchy. Sure, the Queen and the royal family may not actually rule the country anymore, but they represent history, tradition, and apolitical unity that the country looks to for strength in times of turmoil.

But why Americans love the royal family is another question altogether — one that the docu-series attempts to answer. Whether it is a royal wedding or the birth of another royal baby, Americans can not get enough of the royal family. Then, when Prince Harry decided to marry an American, the U.S. became even more invested in the royal family. For many it almost felt like one of their own made their way into the royal family, even though most Americans obviously have no connection to Markle.

This is why The Story of the Royals is perfect for an American audience. The documentary, which was a joint production between ABC, People, and Time Inc. Productions, showcases the key figures who represent the four generations of the crown: Queen Elizabeth II, Prince Charles, Prince William, and Prince George. The documentary includes interview with palace insiders, royal experts, and longtime People contributors. For fans of the royals this is the perfect show to watch.

The Story of the Royals special continues and ends tonight on ABC at 9 p.m. ET.