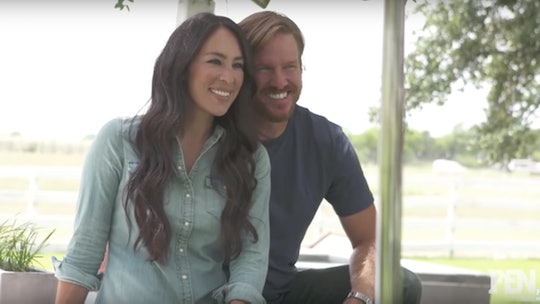 Following the announcement that Chip and Joanna Gaines are expecting their fifth child, people are more interested in the Fixer Upper duo than ever. (Not that fans weren't already obsessed with the cute and quirky duo.) And especially since this will be the last season of their wildly successful home improvement series on HGTV, viewers are likely savoring every new episode while they can. But fans of the show probably wonder what Chip and Joanna charge for their services. The Gaineses' going rate reflects their expertise and popularity.

If you're not too familiar with the series, Chip and Joanna tackle projects in the Waco, Texas, area — and then it's exactly as the title suggests. People buy neglected homes in need of some TLC, and they enlist the help of these charming home-renovation wizards. Prospective clients go through an extensive application process, as revealed by blogger Rachel Teodoro of Holy Craft, who interviewed season three Fixer Upper client, Jaime Ferguson. "I applied to HGTV and heard from the casting agency the next day," Ferguson told Teodoro. "After that it was a quick, big, exciting blur consisting of a Skype interview, written questionnaire and some phone calls and meetings. I think things might be different now that it's gotten so big!"

So how much cash should prospective clients plan on dropping? (And will my dream of living in a Chip and Joanna home ever be a possibility?) Sorry to burst your bubble, but it looks like were talking hundreds of thousands of dollars, here. POPSUGAR reported that cast members on Fixer Upper must put down at least $30,000 for renovations — on top of buying the home. Yeah, so this definitely isn't a cheap endeavor. What's more, is on top of the price of the Waco, Texas, home — the only area in which Chip and Joanna currently do their projects, according to the Magnolia Market website — and the $30 grand for renovations, clients apparently have to whatever Magnolia Market decorations shown in the final reveal that they want to keep. A quick look at their website reveals this could set you back quite a bit, depending on your tastes. The going price for Magnolia rugs, for instance, spans anywhere from $89 to more than $2,500. And this "Me & My House" wall hanging will set you back $125.

Even if you have some serious cash to drop on a home in Waco, your chances of winding up on Fixer Upper are slim to none at this point. That's because Chip and Joanna announced in September the HGTV series would be ending after its fifth season. Today reported a lot of the reason had to do with focusing on family and their business. "This journey has been indescribable— the opportunity of a lifetime," Chip said in a video clip on the Today Show. "It's such a bittersweet time for us because the last five years, I mean this has been our life — the show, the crew here," Joanna said. She added:

Our beautiful business here in Waco needs our attention. We need to pore into that as much as we can ... Our beautiful children are growing up so quickly.

Although no one knew it at the time, the famous couple was actually expecting their fifth child — a surprise that was revealed earlier this month with an adorable announcement on Instagram, reported Time. “Gaines party of 7,” Chip wrote on Instagram, alongside a photo of the pair flaunting their "bumps" belly-to-belly. “(If you’re still confused.. WE ARE PREGNANT).” Chip and Joanna already has four children together: Drake, 12, Ella, 10, Duke, 9, and Emmie Kay, 7, according to the publication.

With another little one on the way, it makes sense Chip and Joanna would want to take a step back and focus on family, without the added stress and demanding work schedule of Fixer Upper. Although the show's ending undoubtedly breaks the hearts of their dedicated fans, I think it's admirable that Chip and Joanna were able to recognize their needs and prioritize them. But hey, who knows? The dynamic duo could already be planning their big return to HGTV in a few years — which gives you plenty of time to save up for a Gaines home makeover!

More Like This
Reese Witherspoon’s Son Deacon Is Officially An Actor & Is Working With One Of His Mom's Besties
The Worst Fake Babies In The History Of Movies & TV That Will Always Be Unsettling
10 Cozy, Romantic, & Drama-Filled Shows To Watch If You Love 'Virgin River'
'Virgin River' Fans Can't Stop Cracking Jokes About How Charmaine Is *Still* Pregnant