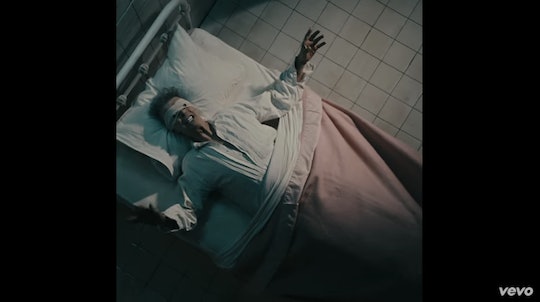 What Do David Bowie's "Lazarus" Lyrics Mean? He Found The Perfect Way To Say Goodbye To His Fans

After David Bowie's death, many fans believe that one song in particular from his final album served as his goodbye. What do David Bowie's "Lazarus" lyrics mean? They're difficult to decipher, but the song does seem to foreshadow the artist's death.

David Bowie died on Jan. 10 after fighting cancer for eighteen months. A post to his Facebook page indicated that Bowie passed away peacefully "surrounded by his family." According to People, the release of his last album coincided with his 69th birthday on Friday, January 8. Producer Tony Visconti took to Facebook to write about Bowie and the meaning behind Blackstar:

He always did what he wanted to do. And he wanted to do it his way and he wanted to do it the best way. His death was no different from his life - a work of Art. He made Blackstar for us, his parting gift. I knew for a year this was the way it would be. I wasn't, however, prepared for it. He was an extraordinary man, full of love and life. He will always be with us. For now, it is appropriate to cry.

Though Blackstar's theme seems to be, "Lazarus" instead appears to offer a clear goodbye. Fans tweeted about the meaning of the song:

"Lazarus" opens with Bowie singing, "Look up here, I'm in heaven." The song proceeds with cryptic lyrics, then references freedom: "You know, I'll be free/Just like that bluebird/Now ain't that just like me?"According to The Independent, the title, "Lazarus", ties in to Bowie's death:

Lazarus of Bethany is the subject of one of Jesus's most prominent miracles in the Bible's Gospel of John. Lazarus is brought back to life four days after his burial, proving the power of Jesus over humanity's greatest and most merciless enemy: death.

“This sickness will not end in death,” Jesus tells his followers after learning that Lazarus is ill. “No, it is for God's glory so that God's Son may be glorified through it. He who believes in me will live, even though he dies.”

The video for "Lazarus" weaves in the concepts of sickness and death. According to The Daily Mail, Bowie plays a blind man who writhes in a hospital bed, levitating when a hand extends from beneath the mattress. Bowie then dances and writes "manically" at a desk before disappearing into a wardrobe. It's possible that the video references his cancer, his work during illness, and ultimately his passing.

Bowie's death is difficult to handle, but fans are grateful for the gift he left them in the form of his final album. Even in illness, Bowie found the strength to say goodbye.