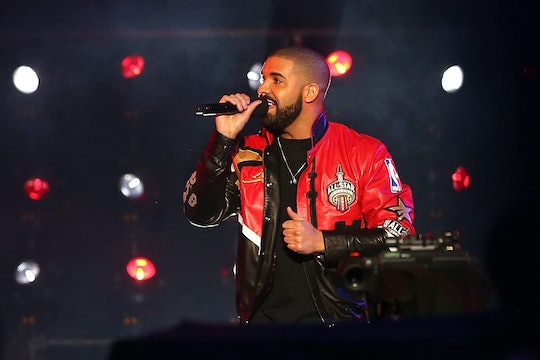 What Do Drake's 'One Dance' Lyrics Mean? It's Not Just About Dancing

Drake is hardly a mysterious man. He wears his heart on his sleeve, he's a terrible liar, and his puberty years are memorialized in countless Degrassi episodes for all to see. His lyrics, though, can be a bit more opaque. So, what do Drake's "One Dance" lyrics mean?

Okay, so when I said, "a bit more opaque," I actually meant very thinly veiled. "One Dance" is undoubtedly a dance song, but let's get deep here, people. Is he just talking about dancing? No. No, definitely not. He's talking about feelings. To be more specific, Drake is talking about love, with a heavy sprinkling of lust because Drake doesn't lie, and, as we learn early on in the song, he doesn't play either. This track has all the hallmarks of a Drake hit, but his style has changed. It's got a funk to it — a bounce, really. It's easy to sing along to. It's a catchy pop song that's not pretending to be anything else. If you're having trouble finding it on the world wide interwebs, it's not just you. He released it over Twitter to get fans pumped for his forthcoming album. But, in the meantime, you can buy it on iTunes. Frankly, it's worth it. Now, on to the lyrics!

Grips on your legs

You know that I don't play

But I never run away

Even when I'm away

OT, OT is never much love when we go OT

I pray to make it back in one piece

I pray, I pray

Already, things are pretty intense. "Front way, back way"? Surely he's not talking about dancing there. So, what we know is that the streets are dangerous, but even so, Drake is not running. He may be dancing, but he's not running. But what's after him? What's threatening to tear him to pieces? It's hard to say.

That's why I need a one dance

Got the Hennessy in my hand

One more time 'fore I go

I have powers taking ahold on me

I need a one dance

Got the Hennessy in my hand

One more time 'fore I go

I have powers taking ahold on me

This part is much more straightforward. Because of that impending doom of being ripped to pieces, Drake has to live it up and dance one last time. And he's not dancing with just anyone — it sounds like he's dancing with a certain someone.

I need to know where do you wanna go

Cause if you're down, I'll take it slow

Cause if you're down

Where, Drake?! Where, where, where. Drake never answers these questions, but maybe he doesn't need to. His message in this song is pretty clear: he's down. Clearly, the song is carefree and fun — it's not meant to evaluate or critique anything, and that's part of what makes it great.