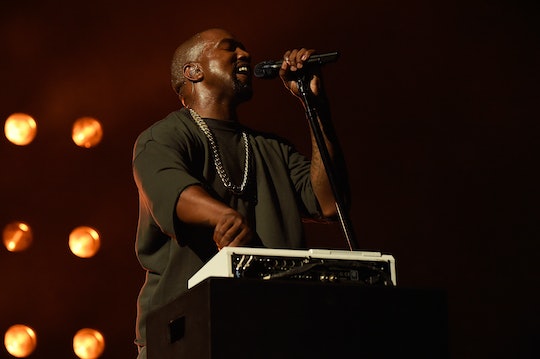 On Thursday Kim Kardashian revealed on Twitter that starting Friday, husband and rapper Kanye West will be releasing a new song every Friday from his upcoming album Swish. To kick things off, the first song, titled "Real Friends & No More Parties in LA" was uploaded to his SoundCloud account a few hours after Kim's tweet (and then deleted, and then uploaded again, but that's a different story). It's a catchy, somewhat sad song based on the melody, but what do Kanye's "Real Friends" lyrics mean? The messages are darker than some of his popular party songs.

Kanye released Yeezus more than two years ago and teased the first track of his upcoming album Swish more than a year ago. Googling "Swish release date" simply turns up the very ominous and frustrating answer "2015," so this weekly new Kanye will be welcomed by fans. Kanye said that he would release the album soon, but, knowing Kanye, it's unclear what that means. Thankfully, the Friday songs will be available on SoundCloud. Here's what I can infer from the lyrics of "Real Friends & No More Parties LA."

He Has Trust Issues

Real friends, how many of us?

How many of us, how many jealous? Real friends?

It's not many of us. We smile at each other.

But how many honest? Trust issues

He's Not Close With His Family

I couldn't tell you how old your daughter was

Couldn't tell you how old your son is

Couldn't tell you much about the fam though

I just showed up for the yams though

He's rapped about not being good at keeping in touch with his family before in his song "Welcome to Heartbreak," but it looks like his relationship with his family is still difficult sometimes.

Money turn your kin into an enemy...

I had a cousin that stole my laptop...

Being successful and famous can make people question who their friends are, and, in this song, it sounds like it makes Kanye question his family's intentions, too.

Kanye's had laptop problems before. In March of last year, he made headlines when Malik Yusef, a spoken-word artist signed to his label, tweeted that private investigators were trying to figure out who stole Kanye's laptop in Paris, while the rapper was there for Fashion Week. Around that time, one of his songs, "Awesome," was leaked. According to Us Weekly, his rep denied his laptop ever being stolen.

Switched up the number, I can't be bothered

I cannot blame you for havin' an angle

I ain't got no issues, I'm just doin' my thing

Hope you're doin' your thing too

It seems like Kanye's busy life might make it easier for him to disconnect from people in order to focus more on his own life.

I guess I get what I deserve, don't I

Word in the streets is they ain't heard from him

I guess I get what I deserve, don't I

Talked down on my name, throwed dirt on him

Although Kanye has admitted to having trust issues, he also seems to take responsibility for the deterioration of his relationships. Since his "friends" haven't heard from him, they "throw dirt on him" by speaking badly about him.

Kanye has never been one to hold back from pointing out people's flaws in his songs — including his own, and this song is a great example of it.