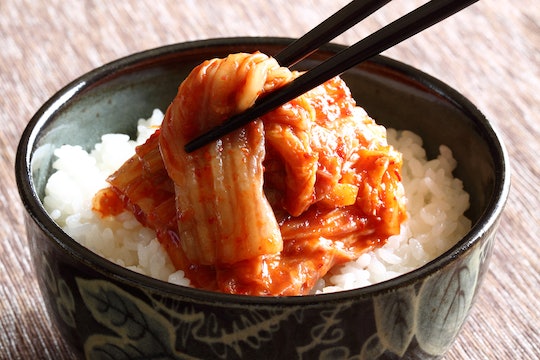 With the PyeongChang Olympics officially in full swing, people all over the earth are curious about this year's host country. I know in my circle of friends, our knowledge of South Korea consists mostly of K-pop bands, crap our President tweets, and of course, Korean barbecue, baby. Koreans are known for their rich food culture, from bibimbap to kimchi, and I find myself increasingly curious as to what their athletes are using to fuel their bodies during this intense competition. What do Korean athletes eat for breakfast? Because, truly, I know zilch about Korean breakfast foods, and as it's the most important meal of the day, I'm dying to know.

Korean athletes, like all athletes, watch their diets closely, attended at times by teams of nutritionists, kinesiologists, and doctors who work in tandem to produce a winning combination of training and nutrition, like that of South Korean rhythmic gymnast, Son Yeon Jae, reported Allkpop. The foods they eat for breakfast look nothing like what most Americans would expect for the morning meal. There really isn't anything in the way of sugary breakfast cereal or chocolate chip pancakes and eggs. Instead, Korean breakfasts look much like the other meals of the day; kimchi, rice, various vegetables, and a bit of carefully prepared meat, served alongside tea or coffee and plenty of water.

I spoke with Korean nutritionist and PhD candidate in exercise physiology, Soon Kim Yeun, RD, and asked her what Korean athletes eat for dinner. She tells Romper, "Athletes in Korea are very well-groomed in their habits, but like any young person, they will indulge. Most Koreans still eat traditional banchan [small dishes of prepared vegetables and tofu] and some meat in the morning, but more Western foods are becoming popular." She notes that American and British cereals and French pastries are gaining steam as fast and easy foods for the morning.

"When I'm working with my runners, I encourage them to eat very little meat. I stress the importance of maintaining their weight and getting enough fermented foods so that their digestion works predictably." Soon tells Romper that foods like kimchi and gochujang paste, as well as fermented soy pastes, work with the microflora in the gut to prevent problems that might slow down a runner. "Breakfast is their largest meal, and they eat it after their first training session of the day. They work out while fasting to rev up their metabolism." Soon notes this likely isn't the case for other sports, but most runners prefer to run on a mostly empty stomach. "They might have some fruit or nuts before their run, but that's all."

She notes that the tofu is prepared simply with little oil and lightly seasoned with a little soy sauce or doenjang, a fermented soybean paste. Seaweed is abundant, as are omelets rolled up with various vegetables stuffed within, served cold. As for their beverages, "Many start their day with hot tea or coffee, similar to Western tradition, but I prescribe hot water with lemon for the electrolytes, which is what many athletes drink, no matter where they're from." Apparently, it's just a really good way to start your day if you're an athlete.

Coffee culture is huge in South Korea. Soon says it's hard to break that habit when it's such a routine part of your day. Many of the athletes choose to drink a few Americanos or cappuccinos, which in South Korea means a latte with cinnamon added in the end. They don't chug it back like we do, though. They sip their drink slowly over the course of their breakfast or just after eating. As a typical American who slugs back her first cup of coffee before she even considers eating, I have a hard time imagining slowing down the process by which the caffeine enters my bloodstream. (But if it improves my running, I just might. Although, as much as I adore kimchi and tofu, I'll probably stick to my oatmeal and apple.)

More Like This
Score Big On Super Bowl Sunday With The Best Frozen Apps From Trader Joe's
41 Costco Appetizers To Level Up Your Super Bowl Party
10 Delicious Dips For Game Day & Also, Life
Are We All Stressed About Grocery Prices Right Now Or Is It Just Me?
What Parents Are Talking About — Delivered Straight To Your Inbox