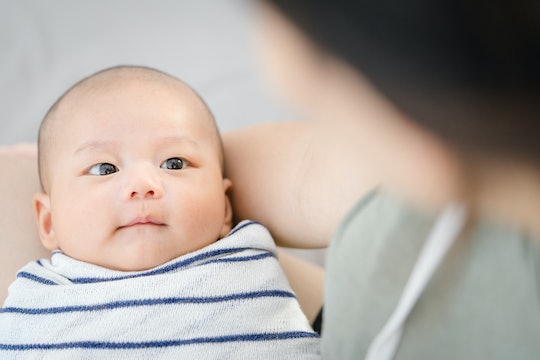 What Do Korean Women Do After Having A Baby? Post-Birth Care Is Special

As people from all over the world head to PyeongChang, South Korea for the 2018 Winter Games, you might be wondering just how different life is for Korean moms. If you are, you might also be surprised to learn that life for Korean women after having a baby is pretty different than life for postpartum women living in the United States. In fact, Korean women have some pretty unique customs for postpartum care, and a lot of them sound downright wonderful.

According to The Korean Times, women in Korea are expected to take it easy after birth, for at least the first three weeks. This means that after birth, you and your baby are expected to stay home, and no one is allowed to visit you. Admittedly for some new moms this might seem overwhelming and isolating, but for others it might actually be the best thing ever. Other Korean postpartum customs, according to MCN: The American Journal of Maternal/Child Nursing, include eating a special seaweed soup and avoiding cold temperatures, which may be awesome in winter time but pretty uncomfortable in the summer heat. If you can afford them, postpartum care centers have grown in popularity in Korea, too, according to The Korea Herald. For $2,800 - $4,700 you can book yourself a two-week stay at one of these post-birth facilities, where new moms can enjoy pampering, meals and snacks, parenting classes, and uninterrupted sleep. That actually sounds like a pretty reasonable deal, considering how scarce sleep can be for new moms recovering from the trauma of labor and delivery.

According to The Korean Times, women in Korea are expected to take at least three weeks to recover after birth called — “Saam(three)-chil(seven)-il(days)," — which sounds amazing. You and your baby are required to stay home, and no one is allowed to visit you, which is part tradition and part to protect your newborn when they are most vulnerable to illness. The same article mentions that this also gives new Korean moms an excuse to turn away their in-laws, which might be just what they need in order to recover in peace.

According to The Korea Herald, the traditional meal for new moms in Korea is a special seaweed soup called miyeokguk. The Korean Times adds that this soup is supposed to help with postpartum recovery and milk supply.

According to MCN: The American Journal of Maternal/Child Nursing, Korean moms tend to defer to their mother-in-laws when it comes to baby-care. A new mom is generally viewed as sick and in need of recovery, which is kind of true when you think about all the body has gone through in order to bring a child into the world. According to The Korean Times it's pretty important to stay warm after delivery, too. "Koreans firmly believe exposing your body to cold would result in 'Saan-hoo-poong' which is unexplained joint pain and body ache after delivery." Accordingly, Korean moms are expected to wear long sleeves and go without air conditioning, even in the summer.

According to the same article, though, this condition can also be caused by not taking it easy after childbirth, which is why new moms in Korea are expected to relax for a few weeks after giving birth. They are also expected not to shower, for at least a week, after delivery.

If you can afford them, postpartum care centers — sanhujoriwon — have grown in popularity in Korea. According to The Korea Herald, these hotel-like centers allow new moms to relax, take parenting classes, and get massages. The center provides meals (including the aforementioned seaweed soup), snacks, and even overnight care for babies so the visiting new mothers can sleep. One potential negative, though, is that at these centers moms are separated from their babies when they aren't breastfeeding. Not all moms can afford this luxury, either, as it costs between $2,800 - $4,700 for a two-week stay. But guys, moms who can afford to attend these centers have the opportunity to sleep at night during the newborn period. I'd argue that's pretty damn priceless.

It seems that no matter where you live in the world, moms experience common challenges recovering from childbirth. Despite our many differences in postpartum care, though, our priorities are pretty much the same — making it through our first few weeks of motherhood relatively unscathed.

More Like This
Mom Gives Birth To Record-Breaking 16-Pound Baby
Diastasis Recti Exercises You Can Do At Home To Heal Your Abdomen
Dealing With Postpartum Back Pain? Physical Therapists Share Their Tips
Here's Why Your Vagina Burns After Sex
What Parents Are Talking About — Delivered Straight To Your Inbox