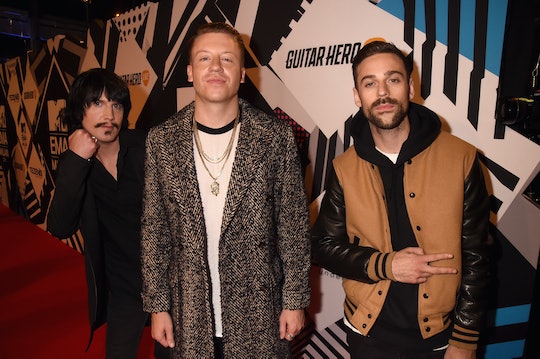 What Do Macklemore's 'White Privilege II' Lyrics Mean? It's A Step In The Right Direction

According to Pitchfork, the track is slated to appear on the pair’s upcoming album, This Unruly Mess I’ve Made, which will be released Feb. 26. Since it hit the internet, "White Privilege II" has made waves, to say the least, leading many to attempt to decipher what the lyrics mean and whether they come from a good place. As of Friday, there was no clear consensus.

“I think my issue w/ Macklemore's "White Privilege 2" is that much like "Same Love," Macklemore's 'consciousness' is discussed the most,” activist Charles Wade said on Twitter. Though some were less than thrilled about the song itself, they mentioned that the song does indeed have a purpose. “All shade aside, I hope some white folks understand privilege and co-opting blackness better after hearing this,” a tweet from Jamil Smith of The New Republic read.

Shining a light on pop culture and society as a whole, "White Privilege II" looks at several aspects of the movement for racial equality. Alluding to the death of Eric Garner in 2014, Macklemore struggles with not stepping over or drowning out black people while advocating for them — something that happens far too often. Simply put, he’s asking himself: If he takes a step back, is he doing all that he can to help?

Thinking if they can't, how can I breathe?

Thinking that they chant, what do I sing?

I want to take a stance 'cause we are not free

And then I thought about it, we are not we

“White Privilege II” also takes on the idea of class consciousness. While people often feel connected to issues that don’t affect them firsthand, and Macklemore weighs whether he should offer his voice to topics like racism or harassment or people who experience those things do the talking.

Is it my place to give my two cents

Or should I stand on the side and shut my mouth for justice? No peace

Cultural appropriation continues to be controversial, called out constantly when it appears in the media and pop culture. Iggy Azalea and Miley Cyrus are two figures regularly accused of it, and Macklemore acknowledges that. What Macklemore addresses isn’t just cultural appropriation, but also musicians who co-opt black culture and do nothing to improve and better the lives of black people.

The culture was never yours to make better

You're Miley, you're Elvis, you're Iggy Azalea

Fake and so plastic, you've heisted the magic…

You're branded "hip-hop", it's so fascist and backwards…

All the watered down pop bullshit version of the culture, pal

But Macklemore also questions the sincerity of pop culture figures who claim to be “down with the cause." Are they doing it because they actually care, or just to promote themselves? It’s very easy to be for a cause when others are doing the hard work, Macklemore says in the lyrics.

You speak about equality, but do you really mean it?

Are you marching for freedom, or when it's convenient?...

One verse in “White Privilege II” includes dialogue from people who are critical of activism, specifically Black Lives Matter. Though mothers often praise Macklemore for his “positive” form of hip-hop — a genre that Macklemore actually credits to black people — many of its consumers go out of their way to dehumanize and disconnect from black people and the inequalities they face.

Cause you get it, all that negative stuff isn't cool

Even the protest outside – so sad and so dumb

If a cop pulls you over, it's your fault if you run

Also part of the dialogue includes a segment on political correctness. The exchange explains how some people think that black people who are offended by blatant racism or police brutality are being too sensitive. Ultimately, they believe that police brutality isn’t systemic and the protests are an overreaction. The dialogue says:

People nowadays are just p*ssies. Like, this is the generation to be offended by everything. Black Lives Matter thing is a reason to take arms up over perceived slights. I'm not prejudiced, I just... 0.99 percent of the time across this country, the police are doing their job properly.

One of the last parts of the tracks is Macklemore's indictment on himself. Macklemore tries to determine if his activism is self serving. He also understands that privilege shapes itself in different ways and that he benefits from it. Macklemore acknowledges that he, like many others, is guilty of co-opting black culture. But, unlike many, he actually wants to help the movement for racial equality. “White Privilege II” doesn’t end with Macklemore's thoughts, though. It concludes with commentary about what the Black Lives Matter movement means and what its goals are.

If I'm only in this for my own self-interest, not the culture that gave me a voice to begin with

Then this isn't authentic, it is just a gimmick…

White supremacy is the soil, the foundation…

We take all we want from black culture, but will we show up for Black lives?

I'll admit, I'm conflicted about "White Privilege II." As mentioned earlier, it personally bothered me that so much of the song focused on Macklemore's own consciousness, after admitting that his own interests can overshadow marginalized people's concerns. However, after looking deeper (and considering different outlooks), Macklemore's take is valuable because it is a firsthand account about what goes through the mind of a white activist who cares about black issues. And it's specifically refreshing to see someone who recognizes that there is a way to amplify other's voices without stepping all over them — even if he's not quite there yet.