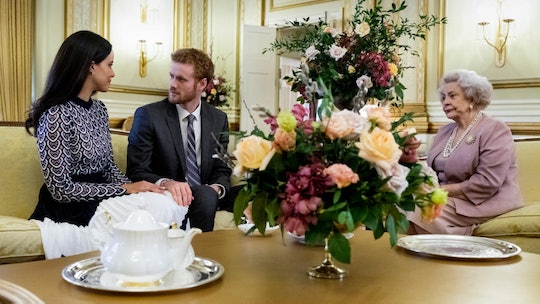 It must be really strange to watch a Lifetime reenactment of your life on television. So what do Prince Harry and Meghan Markle think of A Royal Romance — the made-for-TV movie about their relationship and engagement leading up to the royal wedding? (Upon Romper reaching out for comment, Kensington Palace declined to comment on the Lifetime movie.)

More Like This
Meghan Markle & Prince Harry Celebrated Archie’s 2nd Birthday With A Sweet New Photo
“He Is Hysterical”: 12 Of Meghan & Harry’s Cutest Quotes About Archie
What To Stream Right Now For Kids Who Love History
Here's Everything You Can Watch On Lifetime This Mother's Day

But even though the public won't be getting an official statement from the couple anytime soon or know if they'll even watch it, you have to believe they're at least aware of it. Since Markle is an actress and has actually been in some Lifetime movies, I like to think that she's going to force Prince Harry to have a movie night with her and watch it. Why not, right?

Murray Fraser and Parisa Fitz-Henley, who portray Prince Harry and Markle, respectively, did a very good job embodying the characters, so at least they can't be offended by the performance. The writers only had a few weeks to pull the script together, according to Elle, and they tried their best to keep things as realistic as possible. But remember, they only had a rough timeline of press appearances and anecdotes from their interviews to work with during the process. So if the couple has any complaints about the movie, it might be that some things are exaggerated or ignored altogether.

The writers really tried to avoid that, though. Co-screenwriter Scarlett Lacey told Elle:

We tried to be really truthful. We used our imaginations in places, but there was so much available, from Meghan’s own words [via her interviews and blog]...There were so many things we knew to be true, if not in words, then in spirit.

According to The Washington Post, there are two rather contentious scenes that the couple might pay more attention to than others. The first is a love scene, in which Harry and Meghan are depicted kissing in bed. According to Vanity Fair, director Menhaj Huda reportedly heard that Kensington Palace was worried about that particular made-for-TV moment. (He claims to know this because his wife's close friend is reportedly dating a palace communications officer.)

The other possibly controversial moment is a scene that portrays the time Prince Harry issued a message to the press scolding them for treating his fiancée so poorly. In the movie, Markle is angry at Harry for standing up for her and breaks up with him, saying, according to The Washington Post:

I have spent years dealing with trolls and death threats all by myself, just a part of being in the public eye. I made peace with it because I am … not some fragile wench up in an ivory tower. My tower ain’t ivory, dude. And I’m not going to be put into one, you hear me?

Then, she goes to her mother who offers some perspective on where Harry was coming from and the couple get back together. It sounds very dramatic and might not be entirely true to life.

Producer Michele Weiss said in an interview with the Post:

The statement that Harry released … that’s a pretty incredible departure of how the royals tend to respond to things like that. We were trying to create something that made sense given who they are and their circumstances.

So that might be one of the moments the real Markle and Prince Harry share a laugh over when they watch the movie.

Hilariously, back when they were casting for the movie, Markle's name was still in a Hollywood database for actresses. Given her past experience with TV movies, she theoretically could have played herself. For that reason, and that alone, the couple should definitely watch the movie. Hopefully they like it.