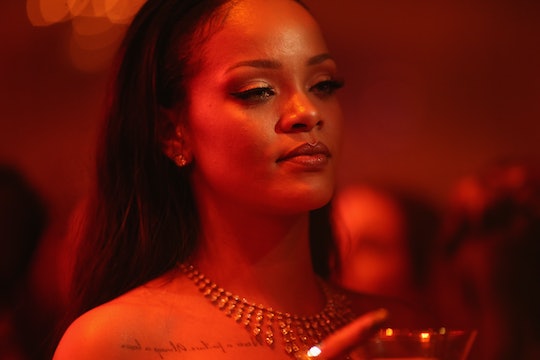 What Do Rihanna's 'Work' Lyrics Mean? The Single Is Pretty Relatable

Rihanna dropped “Work” Wednesday morning to the delight of millions of fans. The track, which is a collaboration with Drake, will appear on Rihanna's upcoming albumm Anti, which is rumored to be released this week. But for right now, people are really enjoying the club hit (minus the fact that it's only streaming on Tidal). And like any club hit, one question keeps coming up: What do Rihanna’s “Work” lyrics mean? The song is catchy, emotional, and relatable.

Let’s face it, pop songs strive off of repetition. So, what can you gather from the chorus? Rihanna is doing a ton of work, work, work. Oh yeah, and a ton of dirt, dirt, dirt. But it seems like fans — some of whom are puzzled by the lyrics — are just happy to get a new track from the “B*tch Better Have My Money” singer. “#WORK is just unperfect perfection, if that even make sense. But IT IS. Love it. Feels real. Can't wait for #ANTI!," one fan tweeted.

Regardless, the song has made its mark within hours of its release. Inquisitr reported that “Work” is number one on the U.S. iTunes charts, so it’s reaching quite a few ears. And it's safe to assume that "Work" was released as a primer to Anti, so fans are getting an idea of what to expect next.

However, there are some takeaways from “Work” between the choruses. Needless to say Drake and Rihanna recount some feelings that come with love, and of course, they're pretty relatable ones.

In the first verse, Rihanna sings about meeting someone who gives you the world but lets you down. In the lyrics, she tells the story of falling for someone who takes advantage of her vulnerability and gives her nothing in return.

I believed all of your dreams are fruition

You took my heart and my keys and my vision

You took my heart off my sleeve a decoration

You mistaken my love I brought for you for foundation

Though It's Hard To Let Go

But in the second verse, Rihanna acknowledges that she also has some learning to do, and that while she was doing her dirt (dirt, dirt) she didn't pay too much attention to her love interest. She also mentions that while his past — something she also has — may have brought her actions about, knowledge of his past doesn't justify her actions.

Don’t leave me stuck here in the streets (no, no)

If I get another chance toI will never, no never neglect you

I mean who am I to hold your past against you

Taking It Slow — As Hard As It Is — Is Alright

Though Rihanna is pretty hasty about love, Drake swoops in during the third verse offering a different perceptive (or a response). Things may move slow, but he is still into her — even if someone similar came around. Part of the reason may be determination, but Drake emphasizes that patience is key.

We just need to slow the motion

Don't give that away to no one

Long distance, I need you

When I see potential I just gotta see it through

If you had a twin I would still choose you

I don't wanna rush into it, if it's too soon

But The First Step Is Talking About It

Though there may be a ton of outside influences, Drake finishes the verse saying that talking "face to face" would clear up a lot of issues in the relationship. While patience is important, so is communication. Meaning both must work in tandem so things can work (work, work).

I got n*ggas tryna end me

Oh, yeah, I spilled all my emotions tonight, I’m sorry...

We just need a face to face

You could pick the time and the place

You spent some time away

Now you need to forward and give me all the [work]