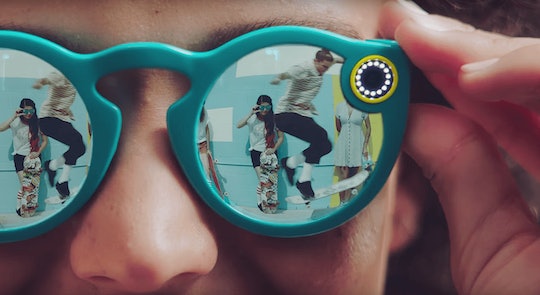 What Do Snapchat Spectacles Do? These New Camera Shades Could Be A Game-Changer

On Saturday, Snapchat quietly announced a new offering to its ephemeral photo and video empire: Snapchat Spectacles. What do they do? Well, it's a big venture for the company, now rebranded from Snapchat, Inc. to Snap, Inc., another quiet little news item announced over the weekend, too. Most social media buffs and young millennials alike know Snapchat for its text, video, and image sharing mobile application. In June, Snapchat passed Twitter in its number of daily users: Insiders reported 150 million active users on Snapchat every day. That's... a lot of snaps.

So, about these Spectacles — what are they exactly? According to the Snap company blog, Spectacles are "sunglasses with an integrated video camera that makes it easy to create Memories." Spectacles have "one of the world's smallest" video cameras built right into the glasses, and it can connect directly to the Snapchat app, via Bluetooth or Wi-Fi, which means you can broadcast your very own first-person view of the world right from your glasses. Speaking of glasses, this might sound awfully similar to Google Glass, the augmented reality tech specs that never really quite took off three years ago. What makes Spectacles such a breakthrough product is that it directly connects right to a mobile app, allowing users to record and share images and videos in real time.

Snap hasn't offered too many technical details about Spectacles just yet, but what we do know is that photos and images can be uploaded directly to your Memories section in the Snapchat app; you'll have to enter the app to push any of your Spectacles video to your Story stream. Spectacles will record video in circular format — up to 10 seconds' worth. Particularly neat will be the ability to view video captured with Spectacles in either landscape or portrait mode when viewing on your mobile device — without losing any of the image.

Now, before you get ready to whip out the Amex to snag your own pair, you'll have to wait until sometime later this fall: Tech insiders report that Spectacles will cost $130 and come in three colors. I have to admit, they are pretty hot looking, unlike the borderline science fair construction getup that plagued Google Glass. From the videos and promo images out now, Spectacles have a pretty chic, almost Warby Parker-esque aesthetic to them. The fact that they boast some truly rad pops of color in turquoise, hot pink, and black certainly adds to their lust factor.

Will Spectacles be this holiday season's Tickle Me Elmo for technophiles and gadget buffs? We'll have to wait and see — but Spectacles certainly have the potential to change how we share and interact with one another.