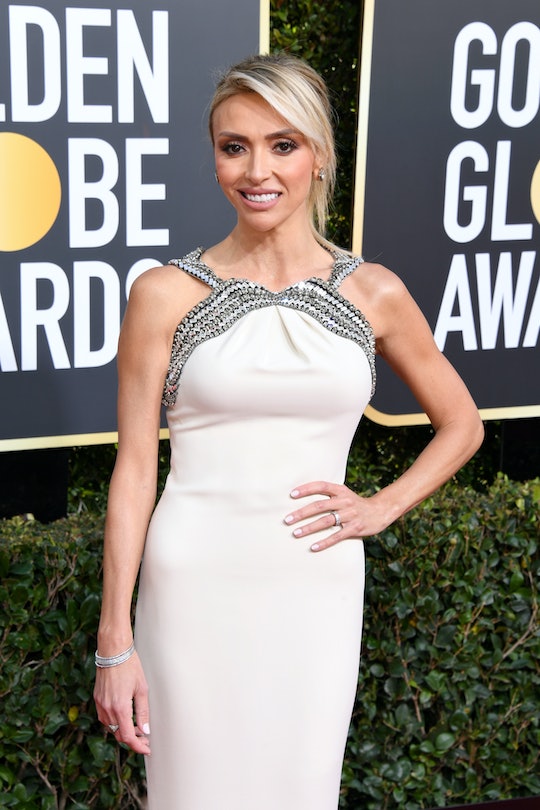 As celebs file down the red carpet at The Beverly Hilton, viewers tuning in may be wondering: what does the black and white bracelet mean at the Golden Globes? Giuliana Rancic was wearing a white Time's Up bracelet around her wrist as she was interviewing celebs on E!'s red carpet pre-show.

According to Variety, Hollywood costume designer and stylist Arianne Phillips (Nocturnal Animals), who designed last year's Time's Up logo and pin, designed a followup ribbon this year to mark the second year of the Time's Up movement. It also reflects the organization's next major goal heading into its second year: to double the number of women in leadership positions across all industries.

The 2018 Golden Globes aired just months after a bombshell report detailed allegations of sexual abuse against producer Harvey Weinstein in the New York Times, triggering a wave of reports against similarly powerful men working in entertainment. A week before the 2018 Golden Globes, a new organization called Time's Up was announced, spearheaded by 300 actresses, female agents, writers, directors, producers, and entertainment executives, according to the New York Times. Through a series of initiatives, they planned to course-correct the power imbalances which had flourished in Hollywood, making rampant and systemic sexual predation the norm.

Crucially, they also understood that the #MeToo movement had taken off because wealthy, white actresses were coming forward to speak up against their abusers. The founders of Time's Up recognized that similar abuses of power were taking place in blue collar industries all over the world. So they set up a legal defense fund to help working class women report and litigate sexual harassment at work, and pursued legislation that would put an end to the practice of companies using nondisclosure agreements to silence victims of workplace sexual misconduct.

Last year, Golden Globes attendees wore black to bring visibility to the Time's Up movement and its cause, with key figures bringing career activists as their dates to speak to the grassroots work they've been doing for decades in this field. This year, celebs are wearing the updated black and white TIME'SUPX2 ribbons, which, according to Variety, "symbolize that supporters are tied together in their joint commitment to create safe, fair and dignified workplaces for women of all kinds."

Debra Messing previewed the bracelet on her Instagram, writing, in part:

Women are over represented in many low paying jobs but under represented in leadership positions across nearly every industry. We shoulder greater caregiving responsibilities for children and elderly parents and are more likely to live in poverty. This picture is not acceptable. That’s why, at the beginning of our second year, we are launching #TIMESUPX2, to double the number of women in leadership and across other spaces where women are under represented. Please join us on this journey.

Viewers watching along on Twitter seem to be taking notice especially of men wearing Time's Up swag on the red carpet, including host Andy Samberg and nominee Regina King's son, Ian Alexander, Jr.

Supporters can now purchase the TIME'SUPX2 bracelets themselves, along with TIME'SUPX2 tees, tote bags, hoodies, and notebooks, through the Time's Up official online store.