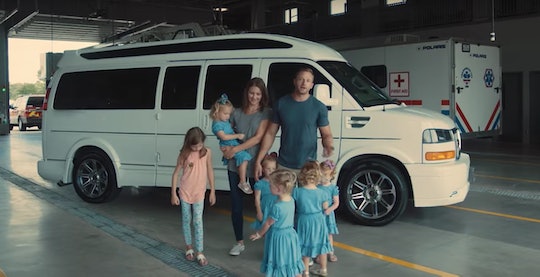 Everyone's favorite quintuplets, plus their parents and adorable big sister, continue to entertain their many fans on their TLC show, OutDaughtered. Over the years, the Busby quints have grown up on our TV screens, recently starting school and just exploring the world together, but have you ever wondered what exactly Adam and Danielle Busby drive on OutDaughtered to get this wild bunch around town? The Busby kids' parents have offered a few glimpses into their family's wheels and how they manage to travel together and keep their kids safe in the car. And, as you'd imagine, their vehicle is about as glamorous as you might think for a brood of their size.

On first glance, the couple's rig, which was shown on Season 4 of the show, looks not much different than a super-big white minivan of sorts. But inspecting enough episodes of the show, you'll realize that with six kids — quintuplets Hazel, Ava, Olivia, Riley, and Parker, and older daughter Blayke — mom and dad Adam and Danielle have to also fit in the car, not to mention Grandma Mimi, who often helps out with just about everything.

All told, that's at least nine people who need a seatbelt, or space for a carseat. No way an average minivan or SUV is going to cover it. No, what the Busbys have is a mini-bus... a pretty cute one, and it looks surprisingly clean. But, at the end of the day, it's still, well, a rectangular bus.

Though they don't explicitly state the brand and make of their vehicle on the show, the Busbys' car looks a lot like a Nissan commercial van that come with 12 passengers seats, so something like that is certainly enough to fit their brood.

Adding more intrigue into the matter of the adorably chaotic crew's transport, Danielle seems to be the only one on camera doing the driving in most episodes. Why? Well, she shared on Twitter in 2017 that Adam's technique on the road doesn't work for her, and she stands a better chance of not getting car sick if she just takes the wheel herself.

"Adam drives like a maniac and I get car sick so easily especially after having the Quints. I rather drive [than] puke in car," she wrote on Twitter at the time.

Adam does get some time behind the wheel, though. For instance, in a video shared on their YouTube channel in September 2018 — titled, "How We Keep the Quints Safe in the Car" — Adam met with a child passenger safety technician to learn about car seat installation and make sure theirs were good to go. "Our kids are going to be safe in this vehicle, they're safe in their car seats," Adam says after meeting with the technician.

In the video Adam also shared that what they were driving in September 2018 was a "brand new van," so it's unlikely that they've traded in their wheels for something else just yet.

Though things are undoubtedly hectic and busy for the Busbys, it seems this family truly enjoys this wild ride together. And, thankfully, they have the car necessary to get the job done.

This article was originally published on Aug. 29, 2018