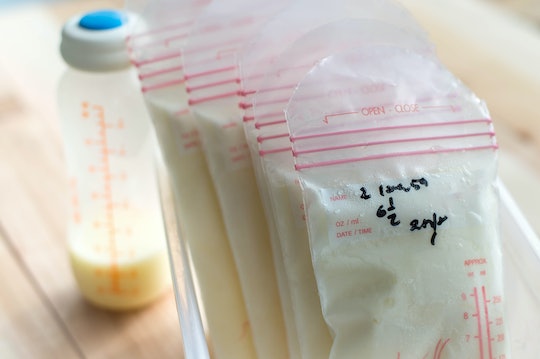 What The Different Thicknesses Of Your Breast Milk Mean, According To Science

Breast milk is amazing stuff. When I was breastfeeding, I was in awe of just how much milk my body could produce, and how it seemed to be constantly changing. One day it was super watery and the next day, it was super thick. But what do the different thicknesses of your breast milk mean? Is it a problem, or the normal course of your supply?

Like a good Spotify playlist, the composition of breast milk is an ever-evolving thing. It's a biologically tailored response to baby's needs, making each pump or feeding different. The composition changes even during the course of a single feeding, according to Kelly Mom. The first milk that exits the breast is foremilk — it's the easiest and quickest to get out of the breast, and it is mostly simple sugars and water. As the baby continues to suck, more and more fat becomes dislodged and makes its way out of the breast. It's a very slow change, but noticeable. You may be able to see the difference if you pump for a protracted period of time, and produce a lot of milk. Two bottles from the same pumping may be different color and texture, not unlike the difference between skim and whole fat milk. The fattier milk will also be a deeper golden hue and smell differently than the lighter milk.

So what do the different thicknesses of breast milk mean? A study published by the Pediatric Clinicians of North America found that the texture, thickness, and flavor are not only different from feeding to feeding depending on a baby's needs, but that it has the capacity to change rapidly based on the biofeedback from the baby's saliva.

Breastfeeding is not a closed process, according to the journal. Even though most of the flow is outward from mother to baby, some of the baby's saliva makes it back into the ducts of the breast via a reverse suction, where the mother's body is triggered to change the composition of the milk based on the markers in the saliva. If your baby has a cold, the milk will have more bioactive molecules necessary to fight the infection. As your baby matures, the milk changes to adapt to caloric and nutritive need, changing the thickness and texture.

According to the Journal of Early Human Development, your breast milk also knows when you've given birth relative to your due date. Their study confirmed that breast milk created by mothers of premature babies had more adipokines — fatty content — than mothers of full-term infants. This fatty content helps preterm infants reach their term weight in a controlled, steady path. There is also baby formula that is designed to mimic the breast milk produced by preemie moms.

Breast milk not only changes with the needs of the baby, but with the health and nutrition of the mother. According to a report in Breastfeeding Medicine, the taste and texture of breast milk is altered when the mother has an infection like mastitis. Using a "taste sensor" (his name is Steve, I'm imagining) they evaluated flavor profiles and textural changes of mothers with mastitis and concluded that it is profoundly altered. Apparently, there's less of an "umami" flavor during inflammation. I never really considered my milk in terms of umami, but now I can't get the image of a baby tasting a boob like a fine wine out of my head, and you can't either. You're welcome.

Unsurprisingly, the texture and thickness of your milk also has something to do with what you eat. According to the American Journal of Clinical Nutrition, women's diets do have an effect on the quality and texture of their milk. For instance, women who eat fish while breastfeeding their children have higher concentrations of omega 3 fats in their milk than women who do not. Women who have a diet rich in vitamin C have milk rich in vitamin C. This not only affects the nutritive compounds, but also the texture of the milk.

Breast milk is cool as heck. If you ever want to do a fun experiment, line up a bunch of your pumped bags of frozen milk and note the different colors and freeze patterns. It's like a strange, milk rainbow courtesy of your boobs. It almost makes you want to ask your child what vintage they would like for dinner. "Remember that week I ate nothing but Funyuns at 3:00 a.m. because you never slept? How about that one?" Actually, the Funyun milk may not be the tastiest come to think of it.