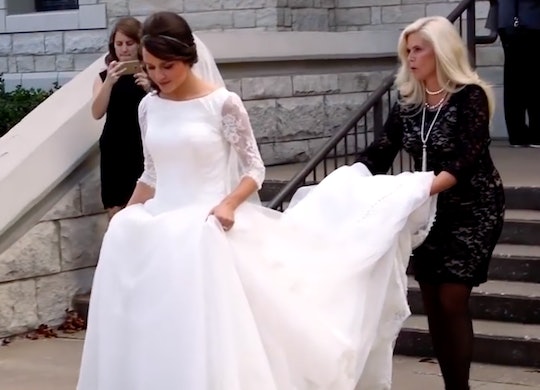 What Do The Duggars Do At Weddings? They Have A Number Of Wedding Day Traditions

Weddings are a big deal in the Duggar family. The conservative reality TV stars spend much of their lives looking forward to walking down the aisle, and with so many kids in the family, they're a fairly frequent occurrence. There are, of course, strict rules the Duggar family follows when it comes to getting married. So what do the Duggars do at weddings? Here are some of the traditions the family abides by when it comes to their special days.

Longtime fans of the Duggar family know the fundamentalist Christians save kissing, frontal hugs, and, in some cases, hand-holding for their wedding day, according to another article from CheatSheet. As they've discussed on 19 Kids and Counting and Counting On, Duggar kids are required to have chaperones along with them while courting, or dating. This helps them to avoid temptation to kiss or do anything they typically reserve for marriage. While they all hold off on kissing until they're married, each Duggar approaches the first kiss differently.

According to In Touch Weekly, Jessa Duggar and Ben Seewald had their first kiss in private on their wedding day. After being announced as husband and wife, the pair ran down the aisle to have their kiss and spend a private moment together, the outlet reported. Jill Duggar and Derick Dillard shared a similar private moment after saying "I do." Other Duggars, however, smooched in front of all their guests.

Another common Duggar family tradition is to take a piece of mom Michelle Duggar's wedding dress. Brides reported that all the Duggar daughters get a small piece of the dress Michelle and her mother wore on their wedding days. Jinger Duggar, who married Jeremy Vuolo in November 2016 according to People, opened up about the tradition on Counting On. Jinger shared that they incorporate the piece "somewhere in our dress." There does not appear to be a hard and fast rule for where they put it. According to Brides, Jill used her piece as a handkerchief while Jinger sewed hers to the inside of her dress.

As you can probably imagine, the Duggars often have a lot of guests at their weddings. In addition to their massive family, the Duggars have a lot of friends. Per InTouch Weekly, Josh and Anna Duggar had the smallest wedding of all the Duggars. The couple had about 300 people at their wedding, according to the outlet. The Dillards, on the other hand, had about 2,000 guests, according to the outlet. The other Duggar weddings each had about 1,000 guests in attendance.

Despite how many people they invite to their weddings, the affairs are modest. The Duggars don't typically serve a large meal or have big receptions, as per CheatSheet. Reddit users pointed out that in past episodes of the show, it's clear that food isn't the star of Duggar weddings. Joy-Anna Duggar, for example, served "popcorn, pretzels, and other snacks," but nothing else, according to a post on Reddit. However, InTouch Weekly noted that Josh and Anna's wedding included 200 pounds of crab salad and 500 sandwiches and Jill and Derrick's wedding included 600 cupcakes 3,000 root beer floats, and 3,000 chocolate chip cookies. And according to a photo posted to the family's Instagram account, it appears that Joe and Kendra had a large wedding cake at their celebration.

There is no alcohol at their weddings either, mostly because the Duggars don't drink, as Bustle noted. Drinking could potentially lead to irresponsible or immoral behavior, and therefor doesn't fit with their values and beliefs. Additionally, they don't like the taste. Jessa and Jill previously admitted that they have had small sips of alcohol, as per Cosmopolitan, but it wasn't to their liking.

While dancing is often a big part of the fun at weddings, there's none of that going on at Duggar weddings. According to E! Online, Michelle previously told Us Weekly that dancing encourages "sensual" feelings, so they don't do it. Jessa also noted that much of modern music is "promoting sex, drugs, all that type of stuff," so they listen to strictly gospel music. Music may be played at Duggar weddings, but it's not the kind of party most people are accustomed to.

With so many weddings to attend, it makes sense that the Duggars don't throw an over-the-top bash each time. It's not about the extravagance, but rather the significance of the day anyway. Now, which Duggar will be the next to walk down the aisle?