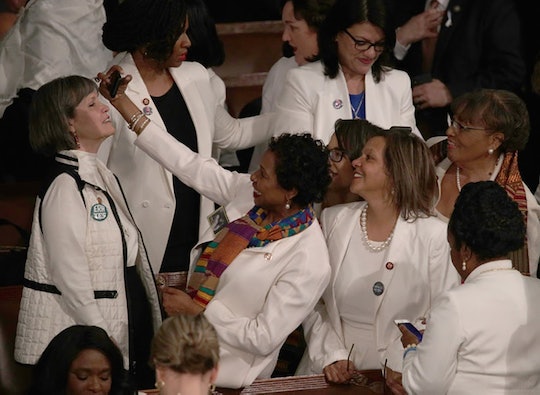 Shortly before President Donald Trump gave his State of the Union address on Tuesday, Feb. 5, some people on Twitter spotted Democratic congresswomen sporting "ERA Yes" pins. So, what do the ERA Yes pins mean? The buttons convey a powerful message about women's equality.

Democratic congresswomen put forth a message of unity and strength Tuesday night, with many members showing up to Trump's speech wearing white. White is symbolic of the women's suffrage movement (which led to passing the 19th amendment, therefore giving women the right to vote) so it was perfect color for Democratic congresswomen to don following a victorious 2018 midterm election season. Additionally, the white was meant to act as a nod to all of the people who voted them into office.

Florida Rep. Lois Frankel and chairwoman of the Democratic Women' Working Group, tweeted about this moving plan on Monday, writing: "By wearing suffragette white to #SOTU2019 tmrw we’re sending a message to everyone that voted for @HouseDemocrats & delivered us the majority that we're working #ForThePeople, promoting the economic security of women & their families!"

To top this beautiful display off, some Democratic congresswomen wore ERA Yes pins, a rallying cry to pass the equal rights amendment. Talk about the perfect accessory.

Countless women are moved to see these pins, including the ERA Coalition. The ERA Coalition's mission is to "support and help lead the movement for passage of an equal rights amendment through public education and messaging campaigns," according to its website.

"Great to see @HouseDemWomen in #suffragette white- TY to delegates wearing out #ERANow & #ERAYes Pins & TY to our COO @BettinaHager for getting them from our DC office to the #USCapital," the ERA Coalition tweeted.

"Love seeing all of the #ERAYes buttons in the crowd #SOTU," someone else said.

"How fast can I get an ERA YES pin???" one person wondered.

"I spent a summer interning at @amhistorymuseum cataloging #ERA buttons," a commenter chimed in. "I’ve never been happier to see so many ERA YES button in my life #SOTU19."

If you're interested in ordering your own ERA Yes gear, that's definitely possible. There are t-shirts available on Amazon, and you can snag some of the buttons on Etsy.

In addition to ERA Now, some people are discussing ERA Now, a movement to add the 19th amendment to the U.S. Constitution. Although the amendment was passed, not every state has ratified it yet. “I think for most people, they think that the Equal Rights Amendment was ratified a long time ago,” Alaska Sen. Lisa Murkowski said about this little discussed fact, according to Alaska Public Media.

"I am very proud to say that I support women each and every day. There are so many strong women leading the fight today," someone else tweeted about the movement. "I have worked with amazing women leaders in the military and there are just as many fighting for equal rights now."

Given the importance of women's equality, it's pretty amazing and powerful that Democratic congresswomen wore their ERA Yes pins to the State of the Union. It was a moving sight to behold.