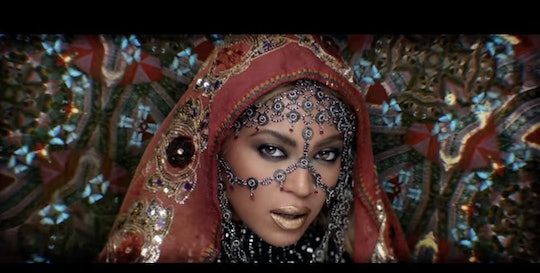 What Do The "Hymn For The Weekend" Lyrics Mean? It's The Perfect Party Song For The Super Bowl Even If It's Been Mired In Controversy

If you're only watching the Super Bowl for the halftime show, you probably won't be disappointed this year (although Katy Perry's sharks did set the bar pretty high). Coldplay is confirmed to take the stage with Beyonce on Sunday next week — and there's a pretty good chance that the duo will sing the big Coldplay hit, "Hymn for the Weekend." The lyrics for "Hymn for the Weekend," make it a pretty fitting tune for the game. It's uplifting in that cheesy late night dance song way, which is exactly what singer Chris Martin intended.

In an interview last November, Martin told the Wall Street Journal that he was listening to Flo Rida when he came up with the hook. "The original kernel was that I was listening to Flo Rida or something, and I thought, it’s such a shame that Coldplay could never have one of those late-night club songs, like 'Turn Down for What,'" Martin said. So he went ahead and wrote one. The chorus is perfect for that late night crowd. Like can't you just hear the whole club in unison?

Anytime, there's a "woo," count me in. The other lyrics talk about finding that kind of loving feeling that makes you feel like you could do anything (or is that just the overpriced party cocktails?).

But while the lyrics are supposed to make you feel good, Coldplay and Beyonce might want to rethink the stage sets and wardrobe. The video is causing some controversy for appropriating Indian culture, according to Billboard magazine. It's a very pretty video, but there are also shots of Indian men levitating in meditation poses and Beyonce is dressed as an Indian woman, looking like a bad Halloween costume. Stereotypes do abound.

Others though see it as a nice tribute to the continent and the culture. Some of the shots on the streets of Mumbai do look postcard perfect. "I adore Beyoncé for embracing my culture," one woman tweeted. "In a country where I'm a 'terrorist' I have never felt more accepted."

Still more Twitter users believed the video did India justice and that only Indians really had a say in who was appropriating their culture:

Technically, it is cultural appropriation. By definition, all that means is an outsider, or a non-member of a culture employing symbols or iconography from another culture for their own use. The question then becomes whether or not it's offensive.

For the halftime show, Beyonce should probably leave the sari backstage. The Super Bowl is about fun. What is more fun than gathering friends on your couch for nachos and beer on a Sunday afternoon? If anything, it's the most American of all American holidays. If there's any chance at all that using imagery from the video or the traditional garb would offend someone at home (or someone watching it on YouTube oceans away), why bother?