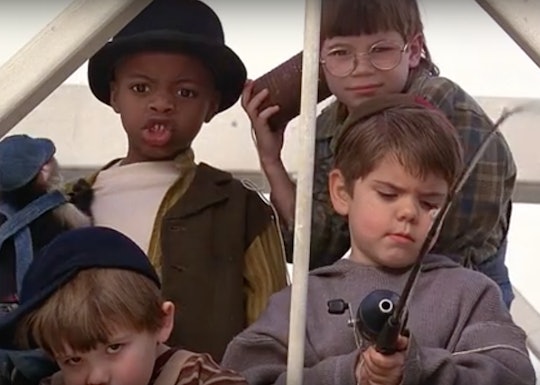 Here's What 'The Little Rascals' Kids Look Like Now

The Little Rascals were a mischievous crew of youngsters. In short: Spanky McFarland (Travis Tedford), who was the president of the "He-Man Woman Haters Club," and Buckwheat (Ross Elliot Bagley) chose their buddy Alfalfa Switzer (Bug Hall) to be the driver for their club's go-kart, "The Blur," in the upcoming Soap Box Derby rally. But instead of representing, Alfalfa was found canoodling with his sweetheart, Darla (Brittany Ashton Holmes), in the anti-girls clubhouse, no less. One might imagine that all the havoc they'd wreaked to sabotage the romance in the 1955 television series, which later became a 1994 film, would have aged the kids real fast. That leaves me wondering, what do The Little Rascals kids look like now?

The Little Rascals is actually an adapted version of a series of 1920s comedic short films, Our Gang, which was centered on the adventures of a poor group of neighborhood kids. In the adapted film version, Spanky and Buckwheat get busy sabotaging Alfalfa and Darla's budding relationship with whoopee cushions; meanwhile, their prized go-kart is nabbed. Oh, and somewhere in the midst of all the mayhem, Alfalfa accidentally burns down the clubhouse. The film is quite the comedic romance and, if you're a product of the 1990s, like me, there’s a solid chance that it was a big part of your childhood.

Most of the Rascal clan reunited in 2014 in honor of the film’s 20th anniversary, according to 22 Vision, and they tried on versions of their classic costumes to recreate the film's posters.

Here's what they each look like now, and what they've been up to since the iconic '90s film.

After The Little Rascals, Hall has played a slew of supporting roles in films and television series like Hercules, Honey We Shrunk Ourselves, and American Pie Presents: The Book of Love in 2009, according to his IMDb page. He's more recently been cast as a recurring character in Revolution and has guest starred in shows like Castle, Major Crimes, CSI and 90210. In 2016 he played Arthur Davidson in the TV mini-series Harley and the Davidsons, and Andrew in the 2017 film, The Shadow People.

Ewing was born on March 27, 1985, which means that he's now 32 years old, according to IMDb. Before playing Waldo, he had parts in shows like The Nanny, Home Improvement, and a recurring role as Derek on Full House. After The Little Rascals, he was cast in Raising Helen (2004) and Hey Arnold! The Movie (2002) and, most recently, A Very Sordid Wedding (2017). He's also got quite a list of television series and movies for which he was a voice actor.

Tedford also became the first “spokes-kid” for Welch’s jams, jellies, and spreads in 1994, according to Screen Rant, before going on to act in a few other films like A Bug’s Life and Freaky Friday. He was also the newspaper boy in the 1999 film The Thirteenth Floor, according to his IMDb. He's now 29, and, according to his Instagram bio, he's a former child actor "turned marketing pro." "Didn't develop drug addiction and as a result: Not famous. Snapchat: Airem," he writes on his private page.

The Little Rascals was Holmes' debut film and she's since had a guest starring role on the Showtime series Red Shoe Diaries, a small part on the 1995 Ellen sitcom, and parts in two low-budget horror TV movies, Inhumanoid and Humanoids from the Deep. Most recently, according to her IMDb, she was cast as "Townslady Britt" in the 2014 TV movie We Hate Paul Revere.

Warkol did commercials for companies like McDonald's, Domino’s Pizza, and Flintstone Vitamins, according to Screen Rant. After small parts in shows like Baywatch, 7th Heaven, The X-Files, and a even recurring voice role on Hey Arnold! as Chocolate Boy, he quit acting in 2006. Screen Rant also reported that he graduated from California State University with a bachelor’s degree in business marketing. The report claims that he now works for Toon Goggles as the director of business development, providing educational cartoons, games, and shows for children.

Bagley was famous before The Little Rascals. He made his debut as Nicky Banks on The Fresh Prince of Bel-Air in 1994, before going on to play the role of Buckwheat in The Little Rascals, according to the New York Daily News. After that, Bagley worked with Will Smith again in the massive film Independence Day as his stepson Dylan, Screen Rant reported.

Mabry was turning just 4 years old during filming, according to AOL. Back then, he was Buckwheat's sidekick Porky and, today, he lives in Dallas and is a senior accountant for American Air, according to his Twitter bio. He also describes himself as a “prolific Tweeter,” with expertise in "fast food and income taxes."

After playing Stymie, Woods went on to voice the puppy in Babe and appear in several TV series like Blossom,Walker, Texas Ranger, and Sons of Thunder, according to his IMDb. He retired his acting career in 2000. Life and Style Magazine reported that Woods now pursues comedy and music and has a YouTube channel, ThaRealKWoods.

Saletta actually debuted as an actor in an episode of ABC Afterschool Specials in 1993 before starring in The Little Rascals one year later in 1994, according to Screen Rant. After the film, Saletta continued acting with recurring roles on shows like Recess, Beverly Hills 90210, King of the Hill, and Rocket Power. He still works as an entertainer in Los Angeles, but now focuses on singing and songwriting. He even studied jazz vocals at the USC Thornton School of Music, released his first solo album in 2015 and was a top-40 finalist on American Idol, according to his music page.

After The Little Rascals, Collins had some small parts throughout the '90s on shows like Minor Adjustments, Men Behaving Badly, and The Fanatics. He also had a role in the film, Richy Rich’s Christmas Wish, in 1998, according to his IMDb page. Life and Style Magazine reported that he now lives out in Los Angeles and works as an assistant camera operator on the FX show Sons of Anarchy.

For more of the cast, 22 Vision shared a YouTube video in 2015 detailing where all the rascals are these days. Where does the time go?