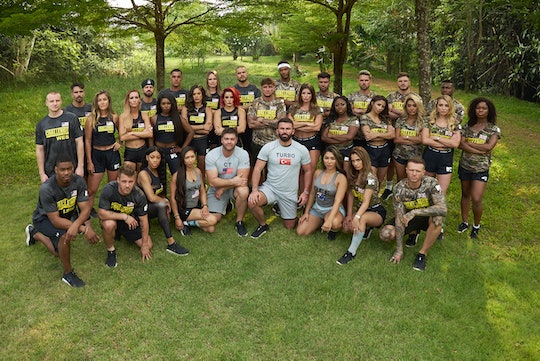 Every season, The Challenge brings new twists to keep players interested and on their toes. This season, War of the Worlds 2 brings back the two team format that fans haven't seen in years and along with it, the idea of a US team against a UK team. There are also four team reinforcements, but they might be different from actual players and could lead fans to wonder what the reinforcements do on The Challenge Season 34.

In addition to the 28 players cast this season, MTV also brought back four players who are basically all muscles and seem like the real threats at this point. The reinforcements are Challenge vets Chris "C.T." Tamburello, Dee Nguyen, "Ninja" Natalie Duran, and Turabi "Turbo" Camkiran. They have all played strong individual games on the show at some point, but they were all part of the cast last season too. In fact, Ninja Natalie made it all the way to the end, even though she didn't walk home with the grand prize money. Instead, Turbo won and apparently he’s back to take home more money while stomping all over veterans and rookies alike.

While MTV hasn't said what the reinforcements do this season, which premieres on Aug. 28 at 9 p.m. ET, it looks like because there are four, each team will get two of them to round out their strongholds. Then, each team will have two of the strongest players on their roster.

I don't think the reinforcements will have any less chance at also winning the money. They might have been added to the cast to add more vets to each team, but they are still returning players, and I’d imagine they are meant to play alongside their teammates rather than coach or guide them.

However, the reinforcements could also be substitute players throughout the season. If a player can't compete or feels one of the reinforcements on their team would do better in their position, they might be given special privileges to be able to call out a reinforcement as their sub in a competition. Past seasons have had similar formats wherein mercenaries acted as substitute players, so this could be Season 34’s way of bringing back that aspect of the game along with the two team format.

On Reddit, user alienware99 pointed out that the reinforcements aspect to the game could have just been a way for the show to bring back players like Turbo and Dee, both of whom wouldn't fit into either the US or UK categories since they are from Turkey and Australia, respectively.

At this point, I don't care why they were brought back. I’m just glad they will be on hand to compete as ferociously as they did last season. As it stands, some UK rookies were brought in to round out the UK team since there weren’t as many available UK players in the show’s history to fill up the team. Bringing back four strong competitors with two in each team to give each team a fighting chance off the bat makes sense.

Recent seasons of The Challenge have featured a similar number of players, so chances are, the reinforcements are going to be added muscle to the two teams but treated the same as the other players with the same chances of moving forward in the game each episode.

Since Turbo won last season, my money is on whatever team scores him on their roster. But right now, with additional strong vets thrown into the mix, it’s still anyone’s game.