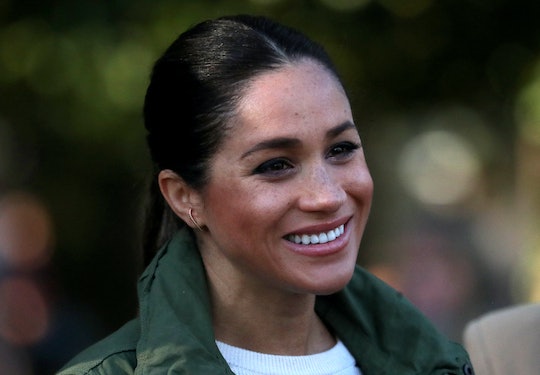 We Know Her As The Duchess Of Sussex, But What Do The Royal Kids Call Meghan Markle?

Meghan Markle is about to become a mom for the first time in a matter of weeks, but she’s been doting on children for a long time already. Of course there are the adorable photo moments when she’s caught with children on the rope lines, and she’s also a loving godmother to two girls. But what about her nieces and nephews, specifically the British ones. What do the royal kids call Meghan Markle? Is their relationship as close as the rest of hers with children?

Nobody’s actually discussed what Kate Middleton and Prince William’s children might call Markle, but it can likely be assumed that she is referred to as Aunt Meghan, as Prince George has been heard referring to the Duke of Sussex as "Uncle Harry," according to The Daily Mail. The Cut actually referred to her as “Aunt Meg,” a reference to what her friends call her, so there’s also the possibility that she is graced with that nickname. And of course she could be called the very British “auntie.”

It was a big deal for Prince Harry that Markle meet his niece and nephew while they were dating. In fact, a royal correspondent told Entertainment Tonight, “The reason he wanted Meghan to meet Prince George and Princess Charlotte was so she could see that — this would be hopefully replicated by them, that they would go on to have children. That you marry into the royal family, but that doesn't mean you can't have a regular family with cute children, and here are George and Charlotte to show that that can happen."

And Markle was apparently equally eager to meet the kids. The same royal correspondent told Entertainment Tonight that “Meghan was really keen to obviously meet Prince William and Kate, but she really wanted to meet Princess Charlotte and Prince George.”

And it sounds like Markle won over the kids in a perfectly appropriate way: by cooking for them. According to The Mirror, Markle is “an avid cook” who “often pops around to visit with Kate and the kids dropping off treats.”

Aunt Meg included both George and Charlotte in her wedding, only leaving out Prince Louis because he was just weeks old at the time, according to Town & Country. The young royals served as page boy and bridesmaid, alongside her goddaughters, Prince Harry’s godchildren, and Markle’s best friend’s daughters, Town & Country reported at the time.

Since the wedding, as Prince Harry and Markle go about their official duties, they’ve often been seen enjoying the antics of kids. There was the funny moment when a teenager in a theater program swore while talking to them. There was the humorous moment on Prince Charles’ 70th birthday when Markle was caught cracking up at Prince George. And there was this sweet day in early 2019 when the couple got down on the ground so some blind children could touch their faces. With this kind of behavior, they’re clearly set up to be the cool aunt and uncle to their own niece and nephews.

And soon enough, the world will find out what kind of parents they’ll be as they welcome their own bundle of joy into the world. But even her own child probably won’t stop Markle from being an adoring aunt to these little ones who welcomed her to royalty.