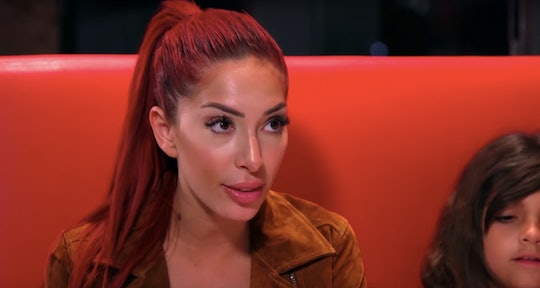 Being a reality star isn't an easy job, especially when cameras are there to capture all of your pitfalls and all of your successes. But for the past seven years, the stars of MTV's Teen Mom OG and Teen Mom 2 have allowed cameras into their lives to capture it all. If you're wondering what the Teen Mom stars do for a living, know that being a mom and part-time reality star might not look easy, but the cast members are able to do all of that and more.

Teen Mom cameras capture a lot of the casts' lives. The cameras reportedly film the cast members of both shows "every few weeks" and the cameras are around the cast members so often, Maci Bookout told Glamour in 2012 that the show's crew "is like family." Appearing on Teen Mom doesn't come without a paycheck though, the nine women in total do get paid for allowing cameras into their lives. It would be silly to pretend like a lot of them don't see the show counting as a job or discount the fact that being a reality star is hard work. Teen Mom OG star Amber Portwood told Cosmopolitan in 2015:

This is a huge job. Right. People think we just sit there and film, but that can turn into a 10 hour day and the crew's exhausted, we're exhausted about talking about ourselves.

But many of these women do have side hustles — or things to bring in a little extra cash when they're not appearing on TV screens. And you have to give them major props for that.

Fans were first introduced to these teen moms when they all appeared on the first season of 16 & Pregnant while they were still in high school. But now that these teen moms are well into their 20s, they all have something more going on.

All of the cast members of Teen Mom OG have published a book at some point in their lives. In 2012, Farrah Abraham was one of the first of the Teen Moms to publish her memoir, My Teenage Dream Ended. Bookout, now a mother of three, published her first book Bulletproof in 2015, which became a New York Times Best Seller. In 2017, Bookout followed up with I Wasn't Born Bulletproof: Lessons I've Learned (So You Don't Have To) in 2017. Portwood penned her book, Never Too Late, in 2017. Catelynn Lowell also decided tell her story through a memoir, penning Conquering Chaos with then-boyfriend (now husband) Tyler Baltierra in 2014.

But writing a memoir only tops what these women accomplish when the cameras aren't pointed at them. Bookout, according to International Business Times, has her own social media marketing consulting agency and helps run her husband, Taylor McKinney's fashion line, Things That Matter. Portwood runs her own online boutique, according to In Touch Weekly, called Forever Haute. Lowell and Baltierra also have their own fashion line specifically geared towards children called Tierra Reign.

Not everyone has jobs that are the most conventional. Abraham made quite the controversy when she started working in the adult entertainment industry and was later told by MTV that if she continued to work in the industry, she couldn't be on Teen Mom OG, according to People. In addition to this, according to In Touch Weekly, Abraham also owns her own frozen yogurt shop, children's clothing store, and furniture store in Texas.

Like the OGs who paved the way for them, the five stars of Teen Mom 2 all do much of the same thing — they have written books, continued to star on the show, and share their lives on social media (and get paid a little in the process). Both Kailyn Lowry and Jenelle Evans have written their own books, according to International Business Times. Evans also has her own merchandise line and cosmetic line, JE Cosmetics, which she sells online.

But not every Teen Mom star has the same job. Teen Mom 2 star Chelsea Houska was a licensed aesthetician for years, according to In Touch Weekly, until she just recently quit to become a stay at home mom after giving birth to her second child. And Briana DeJesus recently revealed, according to Warmful, that she works in the timeshare industry. Mom of three, Leah Messer, has tried her hand at motivational speaking, which was documented on the show, and also is a distributor for the smudge-proof lipstick brand, LipSense, according to In Touch Weekly. With their large social media followings, the members of both casts also get paid to endorse certain products on Instagram, according to E! News.

Filming might keep these moms occupied, but their jobs prove that they work just as hard when cameras aren't filming them.