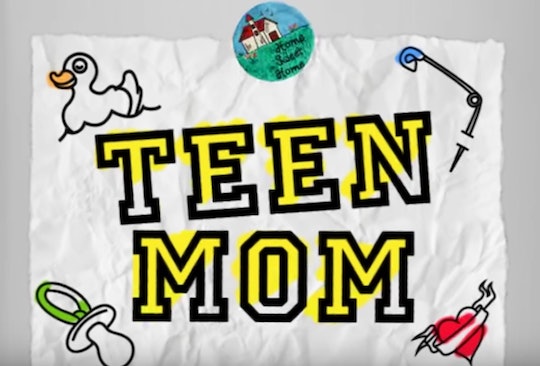 This Is What The Stars Of 'Teen Mom' Look Like Now

In 2009, MTV introduced the world to a group of teenagers who would have their lives changed forever by their pregnancies. 16 and Pregnant and th follow up, 16 and Pregnant 2, was a hit for the reason that MTV dared to show off the real lives of teenagers going through real things. And a few years later, MTV followed up with these moms in Teen Mom and then Teen Mom 2, documenting the lives of these now-parents. But what do the Teen Mom stars look like now?

Luckily, curious minds don't have to go too far because Teen Mom 2 and Teen Mom still airs regularly on MTV. Teen Mom is currently in its seventh season, airing new episodes every Monday, while Teen Mom 2 is currently on a break after airing this past summer. While the babies that were born on 16 and Pregnant are now grown, the Teen Mom series (along with their social media accounts) give an honest look into how difficult being a parent, especially a young parent, actually is.

The moms are definitely no longer teenagers and their appearances certainly reflect that. Their kids have grown, their lives have changed, and cameras have been there to capture it all to the delight of fans. But you might notice that their appearances haven't changed drastically.

Throughout the course of her time on Teen Mom, fans have watched as Portwood went through some difficult times with her ex-fiancé, Matt Baier, according to People, and raised her daughter, Leah, with the help of Leah's father, Gary Shirley. During her time off from Teen Mom, Portwood appeared on Marriage Bootcamp Reality Stars: Family Edition with Baier shortly before they broke up. This season of Teen Mom has captured the aftermath of that breakup.

But now Portwood has a lot to look forward to in the new year. In November, Portwood announced that she is expecting her second child, a boy, with her new boyfriend, Andrew Glennon.

In 2009, fans watched as Catelynn Lowell and her then-boyfriend, Tyler Baltierra made the decision to put their daughter up for adoption. Since then, a lot has changed — and Teen Mom cameras have been there to capture it all.

In 2013, the couple appeared on VH-1's Couples Therapy with Dr. Jenn, where they figured out their differences on camera. After appearing on the show, the couple continued to stay together and be as strong as ever. In 2015, on New Year's Day, Lowell gave birth to their daughter, Novalee — and later that year, Lowell and Baltierra got married after being together for 10 years, according to Us Weekly. In November, according to Us Weekly, Lowell entered in treatment for having suicidal thoughts. "I'm taking the time I need to take care of myself," Lowell told Us Weekly.

Bookout started off the series by giving birth to son Bentley with her then-fiancé, Ryan Edwards, but like the rest of the teen moms, her life definitely isn't the same. In 2010, Bookout and Edwards broke up, according to People, which she now says was the "healthiest choice" for herself and her son.

Since 2009, Maci has found love with former motocross racer, Taylor Kinney, and married him in 2016. Together, they have expanded their family by two more, giving birth to a daughter, Jayde, in 2015, and a son, Maverick, in May 2016.

Farrah Abraham has been through a lot since the show first aired and she has been pretty vocal through it all. Fans first met Abraham as a pregnant cheerleader who gave birth to her daughter, Sophia, but now know her as an outspoken social media star.

Since her time on Teen Mom, Abraham has chosen to work in the adult entertainment industry. But things came to a head in November, according to People, when MTV gave her the ultimatum of continuing with the show or working in the adult entertainment industry. Abraham is still on the show, according to People, but has called it "manipulated" and "scripted."

On 16 and Pregnant 2, fans were introduced to Kailyn Lowry and her boyfriend, Jo Rivera, who had son Issac, together. The couple split shortly after the show aired and during season 4 of Teen Mom 2, Lowry met Javi Marroquin.

After giving birth to her son, Lincoln, with Marroquin, and staying together for three years, the couple split in 2016, according to Us Weekly, due to both of them being unhappy. This past year was a big year for Lowry, who gave birth to her third son, Lux, with ex-boyfriend Chris Lopez, and graduated from college. Currently, Lowry and Marroquin star on Marriage Bootcamp: Reality Stars where the two have been working out their plans to co-parent.

Brianna DeJesus was a 17-year-old high school student from Florida giving birth to a daughter, Nova, when fans were first introduced to her on 16 and Pregnant 2.

Since then, DeJesus has expanded her family by one more, giving birth to a second daughter, Stella, with an ex-boyfriend earlier this year. But DeJesus has a new man in her life — Lowry's ex, Javi Marroquin. According to People, the two are officially dating after meeting at a Teen Mom 2 reunion special and they could not look any happier together.

On 16 & Pregnant 2, fans watched as Houska gave birth to her daughter, Aubree, with then-boyfriend Adam Lind but a lot has changed since then. In 2014, Houska met now-husband Cole DeBoer at a gas station, according to Us Weekly, got engaged in 2015, and married a year later in 2016.

In January, Houska gave birth to their first child together, son Watson. And in October, Houska got married to DeBoer for a second time (in a much larger ceremony than their first).

Since appearing on 16 and Pregnant, where she gave birth to son, Jace, Jenelle Evans has gone through her fair share of drama. Evans has struggled over custody of Jace with her mom, Barbara Evans.

Leah Messer has been through her own share of ups and downs on Teen Mom 2 since first appearing on 16 and Pregnant 2. Shortly after her appearance on 16 and Pregnant, where she gave birth to twins Aliannah and Aleeah, Messer got married and divorced to the father of her daughters, Corey Simms. In 2012, Messer married Jeremy Calvert and in 2013, gave birth to their daughter. In 2015, the pair split up and finalized their divorce, according to Us Weekly. Now, Messer is an outspoken advocate for her daughter, Ali, who suffers from muscular dystrophy, according to People.

If you're ever wondering what the stars of Teen Mom and Teen Mom 2 are up to, all you have to do is look to MTV, which still airs the show, regularly.