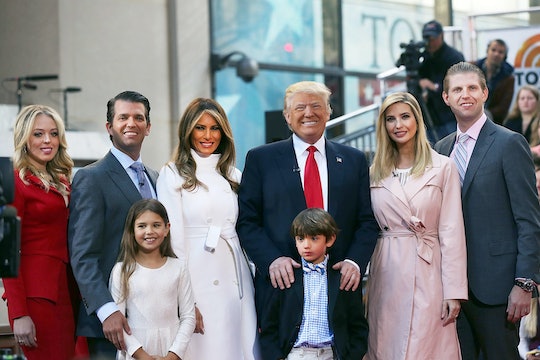 What Do Trump's Kids Do For A Living? Most Of Them Aren't Dependent On Their Father

Now that billionaire business mogul Donald Trump has become the presumptive presidential nominee for the Republican ticket, the attention has shifted from Trump himself to his family — who could potentially become the First Family if he wins the general election in November. As the father of five children from three marriages, many have wondered: What do Trump's kids do for a living? Trump first became a father when he was 31 years old, just nine months (hello honeymoon baby) after he married Ivana Zelníčková, a former Czech model. Trump and his first wife would go on to have two more children together after Donald Trump Jr.: a daughter, Ivanka, and a son, Eric.

After Trump divorced Ivana in 1991, he married actress Marla Maples in 1993, just two months after the birth of their daughter, Tiffany. Trump and Maples divorced after six years, and the billionaire businessman married Melania Knauss, a Slovenian model, in 2005. A year later, they welcomed Trump's fifth child, a son named Barron. Trump's children span the ages of 10 to 38 years old and they have each made names for themselves in their own right despite the spotlight that comes with the Trump family name — and fortune.