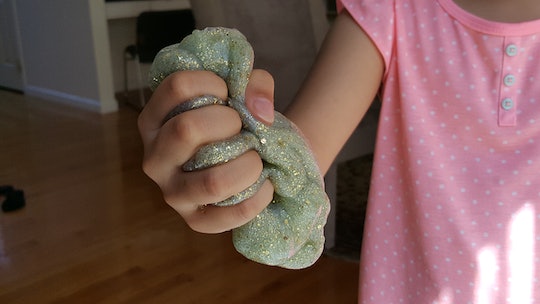 How To Fix Slime That's Gone Sticky, Because It's Bound To Happen

Kids’ fads come and go, but it looks like the homemade slime obsession is here to stay. Because of its DIY nature and the endless creative ideas it can inspire, slime has become an engaging, productive favorite for children and adults. With so many different recipes and ingredients that can be used in slime, however, it can get confusing, and you could end up with a concoction that isn't exactly right. Too much of anything can be a bad thing, so what do you do if your slime is too sticky?

There are tons of variations of slime recipes on the internet and YouTube — the most common of which is probably a glue-water-borax mixture. If your slime is of this variation, you’ll need an activator to bind the molecules of the main ingredient — the glue — back together, Karen Robinovitz, co-Founder of The Slime Institute (a slime-themed experience in New York City) explains to Romper via email. In this case, the activator is borax. Dissolve one teaspoon of borax in 1 cup of water and add a little bit of it at a time to your sticky slime, she says. If your slime becomes too hard, it means you added a little bit too much, too quickly — you can counter it with glycerin or lotion to soften it.

In my house, my 9-year-old daughter Anusheh is the resident slime expert, which is why my bathroom has been taken over by slime-filled Tupperware, glues, and detergents. She has made over a hundred different kinds of slime, in different colors and with various additives, so I asked her what she does when her slime is too sticky. “If your glue-based slime is too sticky,” she says, “keep adding a little bit of liquid detergent until the stickiness goes away.” (If you are uncomfortable using Borax directly, Anusheh says that you can use liquid laundry detergent in its place.) She also adds that you should never substitute baby powder for baking powder to your slime because it will make it super sticky, and no amount of detergent will help.

Other methods you can try are kneading it for a while to get rid of the stickiness, as recommended by Mini Science. Fun At Home With Kids says liquid cornstarch like Sta-Flo Concentrated Liquid Starch can fix slime that has turned out sticky and stringy. Keep in mind that it’s likely your slime won’t stay at its perfect consistency forever — chances are you’ll have to tweak it once in a while as it ages.

After making slime for a while, you’ll realize it can sometimes become a hit or miss, depending on which recipes and ingredients you use. With a little bit of trial and error, and with the suggestions of experienced slime makers, you can fix your sticky slime, and get it to that irresistible, fun texture you wanted.

This article was originally published on Aug. 19, 2017