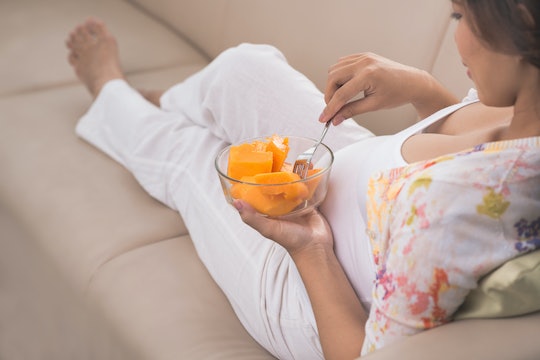 What Do Your Pregnancy Cravings Mean? 5 Things They’re Trying To Tell You

It’s an experience many moms-to-be face: the late night craving for something so obscure that it’s near impossible to find (Sriracha ice cream, anyone?) But in addition to wondering where to get their fix, many pregnant women may wonder what pregnancy cravings mean — other than you want a certain food ASAP.

Well, to be honest, there isn’t a specific answer. Some people will tell you that cravings for specific items are caused by actual nutritional deficiencies or merely psychologically or socially induced. But in speaking with Lori Loghin, a nurse midwife of Overlake OB-GYN in Bellevue, Washington, I discovered that may not be true.

“I don’t think, biologically, there’s a good reason for wacky cravings or any craving for that matter,” Loghin says. “I don’t think there is enough solid scientific evidence to support a reason. We assume that all the raging hormones play a role, but I have yet to find a really good evidence based paper on the real reason women have cravings. The only thing we know for sure is that pregnant women have cravings — for one reason or another, they do.”

But that doesn’t mean there isn’t a reason you’re craving something sweet, salty, or a combo of the two. Whether it’s based in science or some old folk lore, there could very well be a reason you crave chocolate covered pickles every minute of every day.

To help you read between the dietary urges, here are some “reasons” behind the most common pregnancy cravings. (Not that you need a reason. You do you mama!)

More Like This
What Foods Fight Nausea During Pregnancy?
22 Valentine's Day Pregnancy Announcement Ideas Sweeter Than Candy
OB-GYNs Explain The Connection Between Stress & Miscarriage
Fun, Sexy Maternity Lingerie, For When The Mood Strikes
What Parents Are Talking About — Delivered Straight To Your Inbox