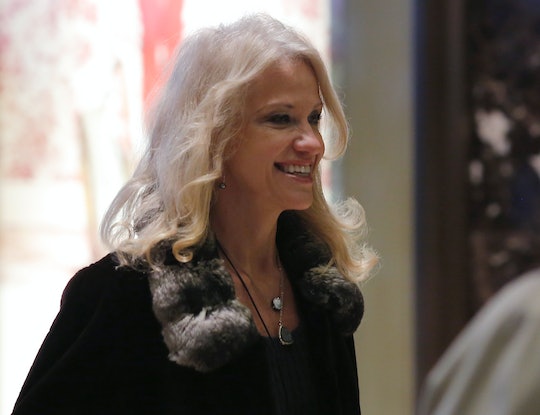 Kellyanne Conway's New Job Is A Powerful One

President-elect Trump is almost finished filling the top jobs in his new government, but his latest appointment was perhaps the most anticipated. Kellyanne Conway, regardless of how you view her politics, was able to do something no one thought was possible — she took over Trump's beleaguered campaign and got him elected to the White House. It was widely speculated Conway would be tapped to be Trump's press secretary, but Thursday it was announced Kellyanne Conway got a job as a counselor. But what does a counselor to the president do? The duties are defined by the president.

Conway, when she took the job as Trump's campaign manager, became the first women to hold that title for a presidential candidate of either major political party. According to The Washington Post, Trump initially wanted her to serve as press secretary, but Conway herself expressed reservations about taking on such a high-profile White House role while trying to balance raising her four children, saying last month at a Women Rule Summit it would be a "bad idea, bad idea, bad idea, bad idea for [a] mom going inside."

The job of counselor to the president's duties are more flexible, and less defined, but still allows Conway to maintain a powerful presence in the upcoming Trump administration.

The Trump transition team, Politico reported, said Conway, in her new role as the president's counselor, will, "continue her role as a close advisor to the president and will work with senior leadership to effectively message and execute the Administration's legislative priorities and actions.”

According to Politico, Conway said that while the title counselor to the president isn't new, her role won't necessarily look like any of her predecessors, which include President Obama's trusted advisor Valerie Jarrett, and President George W. Bush's advisor Karl Rove, in addition to a long list of even more powerful political players.

"Well, the portfolio will be whatever the president wants it to be," Conway told CNN anchor Chris Cuomo about the job, according to Politico. "I'm just really pleased and frankly very humbled, Chris, to take on this role in the West Wing, near the president, and to be supportive of the senior team that he already has in place, colleagues of mine that I've worked together very closely with throughout the campaign and the transition."

Conway joins Steve Bannon, who Trump also appointed as his chief counsel in November, according to The New York Times.

So while the specifics of the title of counselor to the president aren't clearly defined from one administration to the next, one thing is certain: Conway will continue to be an influential, and powerful, force in American politics.