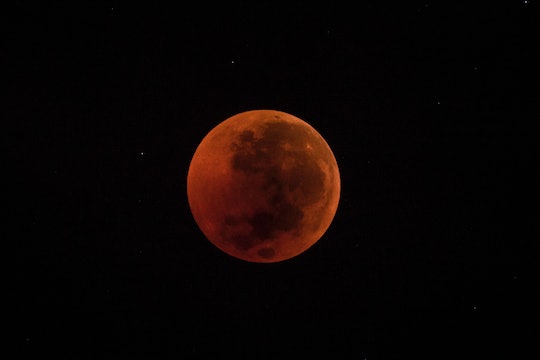 Blood moons, blue moons, wolf moons, strawberry moons — we have them all. Humans love to name things, celestial events not excluded. Each moon has many different names around the world, and learning to differentiate between them can be a bit daunting. For instance, starting tonight, there will be a full pink moon shining in the evening sky. But what is that? What does a full pink moon mean, really?

As it turns out, it doesn't mean much. As per the people at Space.com, the moon isn't really going to be pink, that's just a name given because it's associated with spring and blossoms and the birth of new, pink things. When the full pink moon rises, it will be the same whitish golden color of most every other full moon. Its significance is that it only happens in April. However, according to the astronomers at Space.com, the moon will be quite the sight all on its own, as it will be nearly a Supermoon, which means that it's almost at its closest point to the earth, a phenomenon known as "perigee."

The full pink moon is so named for the flowers of the ground phlox (in abundance this time of year), according to Almanac.com. I think that particular name for the moon won out in popular consensus because it's pretty and makes you think of all the growing things, Easter eggs, and the newness of life. It's a cheerful, happy name for a moon that happens to correspond with the time of the year when holidays are celebrated and bunnies bring overflowing baskets of creamy confections that are nested with great full plumes of sweet pink cotton candy and the eagerness of children.

Almanac.com also noted that it could have just as easily been the Sprouting Grass Moon, the Egg Moon, or the Fish Moon, which are names given by Indigenous people from the Americas. I happen to think there's something fun to both the Sprouting Grass Moon and the Egg Moon, given that during the Easter festivities, there is an abundance of both of these things. The world is large, and history is long and full of strange coincidences that make you question and investigate, especially as you gaze upon something so huge and celestial which serves to make humans feel their true size. We are merely specs on a planet in a galaxy the size of which none of us can fathom.

The full pink moon for 2019 rose on the morning of April 19 at 7:12 a.m. EDT (11:12 GMT), as per Space.com. For watchers on the East Coast, you probably started to see its true beauty sometime just before 7 p.m. If you were sitting down to Good Friday evening service, or just starting your Seder dinner, the moon was your bright companion in the sky, and lended to you its celestial glow as you hide the Afikoman.

I will admit that I am tempted to make pink moons out of round matzo crackers, electric pink frosting (Kosher for Passover, of course) and a ton of edible glitter, but I have reservations given that I know that the frosting would inevitably end up all over children's dresses and ties, and would be an absolute pain to launder. It still might be worth it, though.

So, what does the full pink moon mean? Not much, but it is a fun idea to play around with when you're chatting with your family or when you head out to walk your dog tonight. And it will definitely be beautiful.

More Like This
How To Help Families Impacted By Hurricane Ian
14 Top Gun Costumes For The Whole Family To Buy Or DIY
These 2022 Halloween Squishmallows Are So Cute, It’s Scary
Hocus Pocus Party Inspiration To Put A Spell On Your Guests