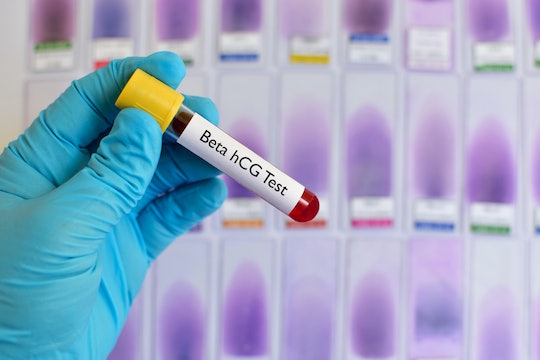 You're sitting in a sterile room, mostly undressed, staring at an image on the wall of a baby sitting in a huge flower. The obstetrician tells you everything looks good, but your hCG levels are low. What does a low hCG level mean? You're not even certain what hCG is, let alone what the levels mean for your pregnancy.

Human chorionic gonadotropin (hCG) is defined by The European Journal of Epidemiology as "a pregnancy hormone secreted by the placental synctiotrophoblast cell layer (the multinuclear layer that will eventually cover the embryo entirely) that has been linked to fetal growth and various placental, uterine, and fetal functions." According to the journal, the hCG levels in a pregnancy follow a regular pattern. The levels of hCG in the blood steadily rise throughout the first trimester, before finally leveling off, and then declining in the subsequent trimesters. This hormone is necessary for progesterone production and implantation of the embryo, but also serves other purposes like the creation of the umbilical cord and blood vessels.

Levels of the hormone in the blood are routinely checked because any abnormality perceived may point to a problem with the pregnancy, the journal noted.

HCG levels are judged by a range of what is considered to be normal, so what does a low hCG level mean? Low hCG levels, according to Human Reproduction, may mean a few things, and the first is the least-concerning — it's possible you miscalculated the date of conception. You might not be as pregnant as you thought. The other possibilities are more dire. It may signal a miscarriage or an ectopic pregnancy (a pregnancy that implants somewhere outside of the uterus). It is also possible that women with low hCG levels are at a greater risk of developing preeclampsia later on in the pregnancy, according to a 2016 study completed for Clinical Thyroidology.

However, high hCG levels are also closely watched because they, too, have inherent risks, according to The American Pregnancy Association. Again, the date of conception may have been miscalculated — you may be more pregnant than previously thought. You may also be pregnant with multiples. Sadly, it may also point to a possible miscarriage or molar pregnancy. A molar pregnancy is either partial or complete, Mayo Clinic noted. A complete molar pregnancy is actually not a pregnancy at all, but just a benign intrauterine tumor with no embryonic or placental cells. A partial molar pregnancy may have some of one or both of those, or even a malformed embryo — not viable.

It bears repeating that levels of hCG in the blood are a range, and that range is wide and shifts during the pregnancy. If your levels are not concerning your obstetrician, then you should try your best to not let it freak you out, even if that seems impossible. Being pregnant is stressful enough on its own without adding one more worry.