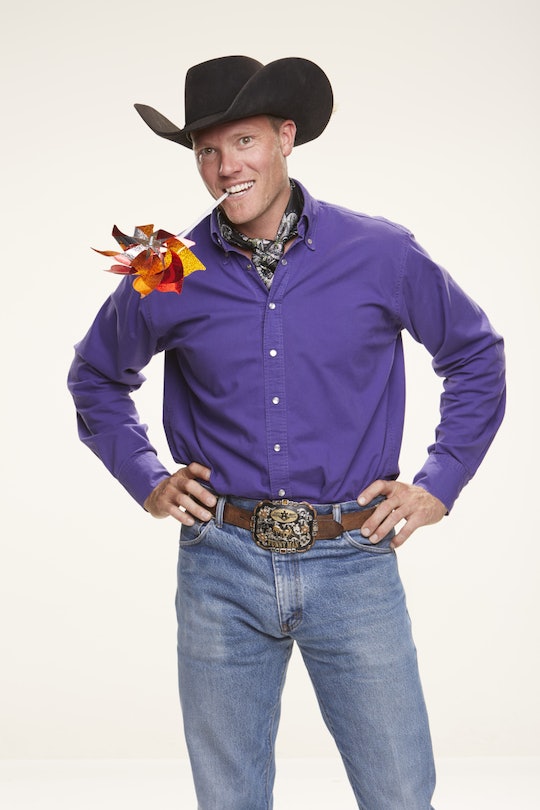 Reality show contestants always have interesting professions, to say the least. There's personal trainers, dog walkers, the classic "model" — but houseguests in Big Brother 19 have some of the most unique jobs I've ever come across. There's cosplay artist Ramses Soto, for example, and then there's Jason Dent. The 37-year-old is a rodeo clown from Iowa seems to take the competition pretty seriously — and, honestly, it sounds like he takes his job seriously too. Dent uses the stage name "Whistle-Nut" and has his trusty bull, Ole. But what does a rodeo clown like Big Brother's Jason Dent do? He clearly loves his profession.

The job of rodeo clown originated in the 1900s; during rodeo shows, patrons would leave when cowboys would need to take a break. Clowns were brought in to entertain them as an act all their own. At first, cowboys themselves would joke around by wearing oversized hats (like today's rodeo clowns do) or riding their horse backwards; bullfighting was added to the clowns' repertoire in the 1920s. Gail Hughbanks Woerner, who wrote a book on rodeo clowns called Fearless Funnymen: The History of the Rodeo Clown, said that they often suffer injuries like cuts and broken bones. That's pretty intense for a job that's aim is to make people laugh.

Today, the main task of a rodeo clown is to distract a bull so a fallen rider can get out of the ring safely. According to Career Search, the median salary is around $50,000 — and that was in 2011, so it may have changed since then. A one-off rodeo job can range from $100 to $500. In an interview with the Times-Republican in 2014, Jason described how he feels as a rodeo clown — and it's pretty intense. "Riding bulls wraps all your emotion, all the good feelings, the bad feelings, the scared feelings, the happy feelings," he said. "It’s like crying and laughing, morning and night all together in one. It’s like an explosion."

It's no secret, then, that he takes pride in his work. He actually set up a Facebook page for Whistle-Hut and Ole, which has over 30,000 likes. His Instagram account, too, shows off photos of the pair together. Judging by his enthusiasm, Jason will most likely talk about being a rodeo clown in the house. No one knows if the skills he learned as Whistle-Hut will translate over to Big Brother, but it'll certainly be fun to watch him try.