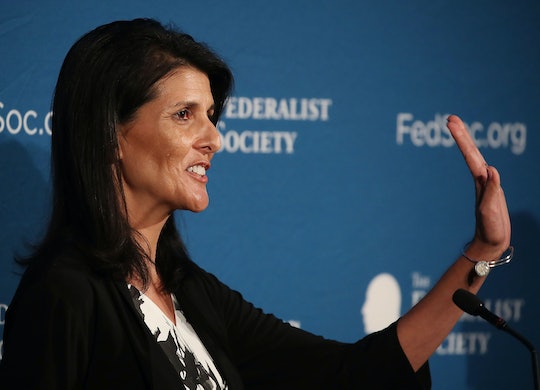 What Does A U.S. Ambassador Do? Nikki Haley Has A Lot On Her Plate

On Wednesday, South Carolina Gov. Nikki Haley was named U.S. ambassador to the United Nations by President-elect Donald Trump. The assignment will need to be confirmed by the Senate before Haley officially takes on the role, but she's already accepted Trump's offer, saying she felt a "sense of duty" to take the job, according to CNN. But what is Haley actually accepting? What does a U.S. ambassador do when representing the country at the United Nations?

Ambassadors to the United Nations are meant to both represent their countries' interests and relay information back to their home states. As U.S. ambassador, Haley would need to represent the country on the international stage, and she would be responsible for keeping the U.S. State Department aware of international happenings at the United Nations.

According to ABC, Haley would keep abreast of events at the United Nations, then make recommendations to the State Department on what actions the country should pursue. Haley would also be responsible for representing American interests at the United Nations in all forms — whether that means pushing for certain Security Council resolutions, requesting budget changes, or blocking potential secretary-generals from appointment. (These are all actions that have been taken in the past by former U.S. ambassadors to the United Nations.)

Trump also voiced a few of his foreign policy views during a New York Times interview on Tuesday, and it sounds like Haley has her international work cut out for her. Speaking to the newspaper, Trump said he wanted to "end that craziness that’s going on in Syria," wanted to witness "peace with Israel and the Palestinians," and thought it would "be nice if we actually got along with Russia." In fact, he suggested, "Wouldn’t it be nice if we [Russia and the United States] went after ISIS together?"

As a state governor whose work has mainly focused on South Carolina, Haley's international experience hasn't been exactly extensive so far, although Trump transition team spokesman Jason Miller told Reuters she was prepared for the job. "She’s done a fantastic job with the state of South Carolina, in helping to improve the economy," he said on Wednesday. "That included a number of overseas trade and business recruitment missions."

Others outside of the Trump team have agreed that Haley's experience as a governor make her a good candidate for the role. "If you think what it takes to get something done at the U.N., it requires building a broad political coalition," Peter Yeo, vice president for the nonprofit United Nations Foundation, told The Washington Post on Wednesday. "Governors have experience in doing that."

Not everyone is confident of Haley's ability to tackle the post, however. "She's such an unknown in foreign policy space that its kind of hard to tell what to expect," an official from the United Nations reportedly told Politico on Wednesday.

Richard Gowan, a fellow at the European Council on Foreign Relations, told Politico Haley will likely face a "hellishly steep learning curve" at the United Nations, thanks to worsening situations in countries like South Sudan and the Central African Republic. He also warned that Russian ambassador Vitaly Churkin will likely see Haley's appointment as "a great Thanksgiving gift," thanks to the governor's lack of foreign policy experience.

With any luck, Haley's experience as a governor will help her learn the ropes on the new job, if and when she's approved by the Senate next year. Between Trump's international aspirations and the amount of work an ambassador to the United Nations takes on, Haley will have plenty on her plate to deal with.